Someone Is Thinking Straight in Malawi 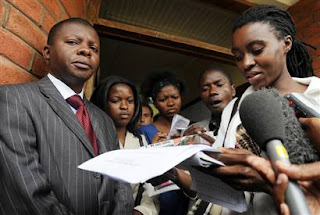 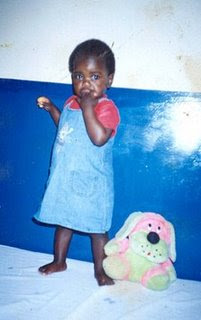 Huzzah and Hallelulia! The Malawi court has spoken. It seems that all the judges in this little nation cannot be bought by wealth and celebrity. Citing the 18-month residency requirement for adopting, a court has ruled that Madonna, the material, serial adopter-celeb, cannot adopt little Mercy James. This is good news, I am sure, for Mercy's grandmother and other family members. The photo at the left is the official reading of the order denying the adoption. At the right, looking extremely sweet, is the child in question.

It is being observed that, when the singer/actress adopted young David Banda, she was, at the time, married to Guy Ritchie. Now divorced, she petitioned to adopt Mercy as a single "parent." I can't help but chuckle at that one. It's about time that the sauce for the goose became gravy for the gander. Even if I do decry the sexism in that idea, it couldn't have impacted on a more deserving target.

At least one child, for now, has escaped the international adoption craze. This little girl is not going to be an accessory or artificial halo. Nor will she be an object for the arrogant assumption by a wealthy person that they would make a superior "mother." I hope, when she gets older, Mercy is able to count her blessings on this one.

I read about David Banda's (Madonna's first Malawi acquisition) visit with his father and was appalled. He said many things that lead me to believe that he had been coached. I am sure, all protestations aside, that the poor man was crushed by his son's inability to connect to him and the lack of sensitivity to his poverty, occupation and culture.

I am even more appalled at the kind of message this is giving the young women of today. I have even read where girls are talking about growing up to ADOPT. Hey! What happened to becoming mothers the way nature intended? Equally disturbing is the casual comment from a few years ago by a young co-worker. She said that, if she should become pregnant while still single and in school, she would want one of her professors, an infertile woman, to adopt the baby. She looked at me like I was speaking ancient Sanskrit when I mentioned that it would be a painful experience for her and her child to surrender her baby for adoption. "Oh, things aren't like that, anymore," she replied. I wonder if she believes that mothers no longer feel the pain and grief of loss?

Well, at least one adoption has been thwarted, for now, and it proves that money and fame cannot always get what it wants when it wants it. I sincerely hope that Ms. Cone-Tits plays with her boy-toys and backs off.

Now, if someone will just jam a stick in the spokes of Angelina's adoption wheel, I'll feel there is some justice in the world.