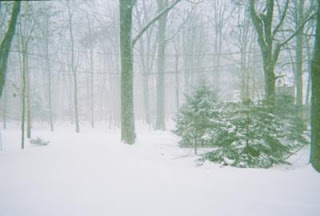 Well, here it is,  almost 4:00AM, and I am looking out our motel window at snow falling softly on top of the two-plus feet already here in the West Virginia mountains, from the weekend blizzard. The manager at Carnifex Ferry Cabins is working to get the power back on and a driveway plowed to our Christmas cabin. We are at a lovely place in Beckley waiting for his call to tell us the cabin is ready. Ah, the best laid plans, etc., etc.

Actually, we are quite comfortable and enjoying this place very much. Our only real problem, so far, is persuading our Florida dog that it is OK to go poopies out in that cold, white stuff. He does look awfully cute on his plaid fleece coat, but refuses to wear the little leather boots. However, between potty battles, there are cookies, egg nog, cocoa and carols at the fireplace in the lobby. There is a 12-foot tree, decorated to the nines, in the center of the lobby/lounge and we're not complaining.

This is our unexpected adventure....plans sidelined by something natural, something awe-inspiring, something scary and beautiful at the same time. It made me wish that my unexpected adventure, becoming pregnant at 16, could have been viewed in the same light....as something natural and, while frightening and problematic, something miraculous and lovely. A new life, a new family member, the result of the most natural urges all life feels, should not be viewed as a crisis of disasterous proportions. What is wrong with this society that we would view unmarried pregnancy with such abhorrence?

It's even more ironic that I am pondering this question during a time when the Christian world chooses to celebrate the purported birth of a baby boy to an unmarried, 13-year-old girl. Yes, I understand that the baby boy in question is believed by many to be the Son of God and a holy miracle. But any time I look into the face of any newborn baby, I see a sacred miracle. And any woman who has ever felt that fierce, brilliant, frightening response to the first movement felt in her womb, the first sight of the child of her body to nourish and protect has participated in something that is worthy of carols, gold and celebration.

The story of that baby boy of Mary's goes on to tell of his later years, when he exhorted us to love one another, to care for the poor, the weak and the needy. I seem to remember a passage in Matthew, 25:40, where he is quoted as saying, "....in as much as ye have done it unto the least of these, my brethren, ye have done it unto me." The "it" he spoke of was simple kindness and charity. Now, call me crazy, but I'll bet there are quite a few mothers who will agree with me that kindness and charity were definitely not a part of the reaction to their unexpected miracles. The same churches that celebrate Mary's miracle, denounce ours and promote the idea of our children being raised by those they consider more "fit."

All it would have taken  would have been simple kindness, a helping hand and a family that could celebrate the arrival of an innocent child into their midst rather than react with shame and censure. Yeah, yeah..I know that was the way society was (and, unfortunately, still is with some groups and individuals) but that fact doesn't make the Era of Mass Surrender right or just. I remember thinking, when pregnant with my oldest and getting ready for a sad holiday, that all were saying to me, "We're going to take your baby...Merry f****** Christmas." And whenever I hear an adopter refer to the child they obtained as a "gift" from the natural mother, I cringe.

Humanity has yet to be able to produce any thing as awesome as a snow-storm. Such a thing is beyond the power of mere men.  In the same vein, they can issue decrees and sign writs and make laws until it snows in Florida, but only Nature can make a mother.

Now, I intend to ignore the hateful responses I am bound to receive from adopters and grateful adoptees, etc., and take my dog for a walk in the snow. He has to let nature take its course, sooner or later.
Posted by Robin at 7:56 AM 3 comments:

I remember tearfully signing the surrender document that took away my parental rights and responsibilities to my daughter, a week after her birth. I don't remember signing those papers after delivering my son, at all, but he was still taken.


Something that I DO remember, very clearly, in both cases, was giving information for the original (TRUE) birth certificates for both children. At the time of the inception of those documents, I was the only true, legal parent of each child. All the documentation of all the medical care that each of us received up to the time of legal surrender was legally mine. If the law is read, correctly, it all should still legally be mine and unavailable to anyone, including adopters, but my children and me.

In that same vein, the original birth certificate should be accessable to only me and each adult child. If any other legal, public record were to  be altered in the way the OBC's were, it would be a capitol offense and punishable by imprisonment. Yet, though the majority of us knew the father of our child, they insisted on writing "unknown" in that slot. Then, they locked these precious documents away and substitued a legal lie, and a physical impossibility and that was used to identify our children from that point forward,

This makes the demand that mothers be included in the numbers of those who receive copies of identifying information all the more righteous. We were there! Many of us did name the fathers. Many of us did name our children. Many of us believed the stories told us of perfect, wise and wonderful adopters who would gladly help our children find us when they came of age. Many of us were sucked into the legalized lie of adoption, much to our painful regret.

We have more than a desire to be included in the numbers of those who receive indentifying information. We have a right..a right based on the fact that many of these documents, especially the OBC and medical records, were generated while we were still the legally recognized parents of our children. WE have a right to this information.....NOT the adopters. And our medical and psychological histories belong to us, kept private under the auspices of the HIPAA requirements and ours to share with our adult children as we choose.

I really admire the courage, the chutzpah and the irreverent humor of Bastard Nation. I have written many a letter to members of congress and newspaper editors, stating, in no uncertain terms, that we neither sought nor were promised anonymity from our own children. The only reason many of us are not standing with linked arms, beside BN in their fight is simple. We want in. We want what was taken from us just as every adoptee wants what was taken from them. Years of separation have made our reunion awkward. Years of lies have made our children see us as what we aren't and instilled painful resentment in so many of our children,


The only cure for this adoption disease is a heavy dose of the truth. Until the truth is openly available to adoptees and mothers, and until the enormity of that truth is realized, it will be business as usual for those who traffic in human flesh to fill the demand of the self-entitled and the arrogant. Sad but true, the fact is that only about 2% of women giving birth truly do not want their child and I know that is not enough baby-flesh to fill the demand. Tough. I don't remember any of us being presented with a gold-edged certificate of guarantee, when we were born, entitleing us to bear children when we became adults. Stuff happens, People.

The truth, overt, brightly lit,unmistakable and there for all to see, is the only way  that we can return to a child-centered way of caring for the ones who truly need the help. But we need to be included, or only one half of the truth will be told. And remember...we Mothers were there.
Posted by Robin at 5:13 PM 8 comments: