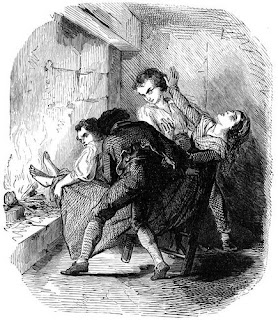 They might as well have done this to us. The mental and emotional torture that was meted out to the Senior Mother during the EMS was no less painful than having one's feet roasted over an open fire. This was what we have been talking about. We were called "sexually deviant and delinquent" and deemed unfit to mother our children without even being given a fair opportunity to do so. Even if we had, as in my case, only one partner in a loving relationship, we were judged to be "promiscuous."

We can laugh at this picture and call it archaic ignorance, but where has this nation been heading for the past eight years or so? Entities like the, so-called, "Moral Majority," the Evangelical Christian Right Wing and others are turning the US into a hotbed of near-medieval attitudes and actions. The word "reactionary" doesn't even begin to cover it. Every bit of social progress that has been made, especially in the era of women's reproductive, social and career autonomy is being chipped away at by the self-righteous right wing, ie., the Grand Old Party.

We got a good look at the Republican platform this past week, and what I see gives me shivers. If the McCain/Palin team makes it to the White House, we Senior Moms might as well try spitting in the wind. How can any party that proposes to increase adoptions, restore the institution of the maternity home and do away with our right to choose our own reproductive lives be expected to listen to us and our message? These people are dangerous!! NARAL is sending out the word and well they should, that we need to work to defeat this candidate of the GOP in every way we can.

I really wish I had millions of dollars to pour into the coffers of the Democrats. Let's face it. Only one minority can understand the oppression of another. That is why I think Joe Lieberman should be horse-whipped. We have some pertinent information, demands and questions for our national leaders. I do not believe that, should McCain be elected, we would ever get the chance to be heard. We are getting on in years and we don't have another 4 to 8 years to waste, waiting for a better atmosphere in which to air our grievances.

Barack Obama isn't perfectly attuned to our frequency, but he comes a lot closer than his counterpart. Eight years ago, I semi-threatened to leave the country if Bush won. Thanks to some fancy dancing down here in Florida and a loaded Supreme Court, he won and I had to eat my words because we, my hubby and I, have no where else to go. We can't afford Sweden or the Netherlands and Belize is too hot for me. Canada is having some of the same struggles, so what is left to us?

Another few years in Iraq and we will have buried a lot of our children and grandchildren. The discarding of Roe v Wade will put a lot of young women in harm's way and cause even more tragedies like the ones that millions of girls experienced during the EMS. And we only have to look at Palin's daughter to see how much good "Abstinence Only" does. At least she is getting the support and love of her family. We were denied that when it happened to us and we didn't have the option of going to the local health department and obtaining birth control. Neither did we have the option of keeping and raising our children and that is the direction in which we are turning if it isn't stopped dead with a solid defeat of the Republican candidates and platform.

This isn't my old anger speaking, but my fears for the futures of my granddaughter and great-granddaughter. This isn't a biased view from a Democratic Party "faithful." (I did, once, vote for a Rep. candidate.) This is the view of eyes that have seen the world change, significantly, and not always for the better, over 6 decades and what I see worries me. People, we can't let it happen again. The "good old days" weren't all that good. For every "Leave It To Beaver," there was a "Peyton Place."

We must retain our freedoms and choices. We must end the slaughter of our military and civilians in the Middle East. We must keep the church and our government separated. We must defeat John McCain in November. Obama and Biden in 2008!!!

It seems to me that both candidates support adoption. I believe I read recently that Obama was a supporter of gay adoptions. We will just have to wait and see.

I agree that both parties have a pro-adoption stance, but only the Republican platform is so heavily influenced by the evangelicals and "moral majority" right-wingers. They would not only push adoption, but would go a step further and take away the right for single women and young girls to obtain birth control. They also are doing all in their power to dismantle Roe v Wade. In the long run, I still think we stand a better chance of being heard by the Dems than the GOP.

There are times even now that I sometimes wish that they had indeed put me whole into the flames rather than to allow me to live this loss forever.