Give 'Em The Old Razzle Dazzle 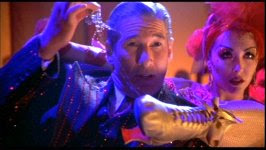 Every time I think of the way the adoption industry has manipulated the media, society and popular thought, I am reminded of Billy Flynn, the amoral attorney from the musical "Chicago."

His big number epitomizes the kind of spin-doctoring that has kept the social engineers and baby traffickers in high cotton. These are the lyrics that bring to mind how warm and feel-good this institution has been made to appear, when, underneath it all, there is arrogance and the slaughter of natural families and a failed social experiment.

Give 'em the old hocus pocus
Bead and feather 'em
How can they see with sequins in their eyes?
What if your hinges all are rusting?
What if in fact... you're just disgusting?
Razzle dazzle them
And they'll never catch wise

Give them the old flim-flam-flummox
Fool and fracture them
How can they hear the truth above the roar?
(Roar, roar, roar!)
Throw 'em a fake and a finagle
They'll never know you're just a bagel
Razzle dazzle them, and they'll beg ya for more

I will also quote an old friend of mine, now deceased who said, while referring to the press releases by the Big Oil Companies a while back, "They're serving up horse shit but it's on a pretty plate." Young women of today are taken in by this kind of fancy side-stepping and honestly believe a lot of the agency's or social worker's patter. Where surrender of a child is concerned, there is a lot of pixie dust being sprinkled around so that the reality doesn't hit right away. Then, when the daze passes and they look on the table, they see the horse shit on the pretty plate and the plate's not so pretty any more.

The sequins were washed out of many of our eyes long ago, and we mothers of the EMS try to tell the truth, but the Razzle-Dazzlers are still doing their dance and it's hard to be heard above the roar.
Posted by Robin at 3:15 PM

An excellent post! In all fairness, the adopters are being sold the same package, but from a different angle. Even in the 60s, my adopters were told that my mother "had two chances" to keep me and that both times she said no. This razzle dazzle made my adopters think that they were doing something wonderful, taking in an "unwanted" child. Of course, the scene was different from my mom's eyes. Now, however, often under television cameras and lights, natural moms are under a new kind of pressure: Giving away a baby is seen as the cool thing to do. Gosh, I really hate the adoption industry and the lies that they've told.

Thinking Mama, I hear you about fairness but I don't see things quite the same way. I firmly believe that most if not all women who adopted knew, in their hearts, that they were adopting wanted babies. They knew the social climate of the times and how the natural mothers were treated. I told an adopter acquaintance of mine about the truth of the surrender experience and she told me I was her worst nightmare come true. She said she always felt that the woman who gave birth to her adoptee was not some careless slut, but a nice girl who wasn't given a chance.

I don't like to hear adopters say "Thank You" to natural mothers because their joy was our greatest tragedy. With a few exceptions (and there are always some in either camp), we suffered our loss, deeply, but in silence.

My daughter's adopter told her, before she died, that she always knew that I didn't want to give her up but that I didn't deserve her because I was a single teen.

The propaganda in favor of adoption is so prevalent and so stupid. Adoption only survives because the proponents of it refuse to debate the subject.I've never heard a debate on T.V. or anywhere else on adoption. It's a sacred cow, but it is giving off a lot of methane.