Life CAN Be Good 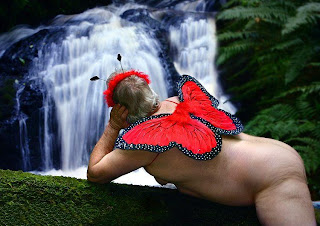 I have to pause, every once in a while, and let people know that those of us adversely affected by adoption do manage life quite well. In fact, we probably appreciate the good times more for the pain of our trauma. I don't think it is an accident that we have artists, songwriters, poets, lecturers and writers among the numbers of exiled mothers and adoptees. Two of my adoptee friends are stand-up comics. And yes, they are funny.

For some of us, the humor of the absurd is very attractive. After all, what could be more absurd than the assumption that a child would be better off without the mother to whom he/she was born, especially if she is a normal, decent human being? What a farce to think that such a mother would be content, nay, even happy to surrender her precious infant to strangers? When we have been pushed into such an unnatural situation, anything natural or "normal" is almost foreign to many of us. So the comedy of the outre' variety is really appreciated by us.

I used to, before I got old enough to start going to bed with the chickens, love to watch Saturday Night Live. There was a sketch done by Eddie Murphy in his persona as Mr. Robinson of "Mr. Robinson's Neighborhood" that had me gasping for air from laughing so hard. He carried on just like a children's TV host but with very adult and shady activities. This particular bit had Mr. Robinson entering his apartment, carrying a blanket-wrapped bundle. Seems that Mr. Robinson's girlfriend had presented him with a little surprise. As the landlord pounded on the door demanding rent from Mr. R., he was ducking down the fire escape, singing, "Tomorrow, tomorrow, I'll sell this kid tomorrow for a cool five grand."

When this particular episode ran, I was just getting into the idea of search and reunion and had attended a meeting where I got a crash course in the dark underbelly of adoption. When I watched the SNL episode with the Murphy segment, I had a, "Well, there you go," moment. Rather than being offended, it affirmed for me the fact that our children were seen as products to be sold and our feelings in the whole transaction never really mattered to anyone. There was a black-market adoptee in that old group and her battle had been a long and arduous one so I knew that this was not so far off the mark. If we can't laugh at ourselves, we are, indeed, sad specimens.

Then there was the SNL skit about "The Whiners," a couple that whined about everything. Sure enough, they wound up in a fertility clinic wanting a "baay-beeee." When they were given the bad news and the doctor suggested adoption, the Whiners, as one, moaned, "But we want our OWN Baaaay-beeee." The upshot of the sketch was that the world was better off if these two never procreated. It was hilarious.

If we spent all our time concentrating on the path that led us to these forums, blogs and groups, we would be a sad and sorry bunch. But, especially if we have reached a stage in recovery where we realize we deserve some enjoyment of life, we don't do that. We have this issue as a PART of our life rather than our lives being a part of this issue. Yes, it has done a lot to form who and what we are. But it is not everything in our world or our lives.

People have been able to find humor in the worst things that can happen for untold years. I still get a chuckle when I remember being rushed to the Savannah, GA hospital in fast labor with my second child. I was being transported by the "house mother," a rigid, prudish. Bible-thumping Baptist who had a special place in Hell reserved for me (a two-timer) and one of my roommates who had the audacity to be Catholic. The pride and joy of her life was her show-room new, 1963 Buick. Imagine her consternation when my water broke all over her brand-new, unprotected, suede-trimmed seat covers. Although in the throes of the final stages of labor, I laughed all the way to the delivery room while Ms. R. surveyed her passenger seat in dismay. I swear she believed I did it on purpose.

I'm not quite sure where I am wanting to go with this, except to say that it would help a lot of us if we lightened up a bit. Certainly grief, anger and pain are normal, But sitting in any of it 24/7 doesn't help us or our adult children. Getting offended at everything anyone says is wasting time that could be spent laughing.

I saw an adopter get all offended by a picture someone had photo-shopped of a social worker turning an infant over to eager adopters. The artist, trying to convey the secrecy and lies surrounding closed adoption, had fitted all in the picture with paper sack masks, including the baby. Everyone else in the room saw the picture as funny, even the adopter's adoptee (whom he referred to as "our precious angel). His "precious angel" was uptight, scared, obese, plain and looked like a prisoner of war with an adopter sitting on each side of her like prison guards. We got the message. If this girl was determined to search, then the adopters were going to be in complete control. I do think she was reunited with her mother, but I don't know the outcome. Seeing those adopters, I can certainly hazard a guess, though. A friend and I still chuckle over that one.

Humor is a satire of life, especially its incongruities. Things can't get more off-kilter than in adoption and adoption reunion. We can't change the past, and while tears are appropriate, so is laughter. I am thinking about donning a purple dress, a red hat and heading out to lunch, somewhere.

And if people laugh at me, I'll laugh right along with them.
Posted by Robin at 11:37 AM

Where in the world do you find the pictures for your blog???

Elaine, if I come across something that looks like it might have a message behind it, I will save it to my pictures file. I also will Google for images by entering, say, "Image of woman laughing" etc. Sometimes the image will inspire a blog and sometimes I have to search for images to fit the blog.

Elaine, if I come across something that looks like it might have a message behind it, I will save it to my pictures file. I also will Google for images by entering, say, "Image of woman laughing" etc. Sometimes the image will inspire a blog and sometimes I have to search for images to fit the blog.

I lways get a chuckle out of the people who call us bitter and angry. I wish they could listen to our giggly phone conversations! If they insist, I heard a joke last night that I could tell them.....wink

When we start being able to laugh about our pain and hardships it's a sign we're getting a handle on it but so disconcerting for observers, confusing too, but doesn't it feel good?
Love the butterfly!

I'm always thankful for laughter. So thanks to you for that photo. It's sweet, too.

I love it! I really do. I have, especially since my daughter decided to yet again take a powder on me, learned that I have a great life. Yes, I miss and love her. But the facts are I have been blessed in ways that are so much more than that. I find it hilarious when my nephew does slapstick (I think the boy has a really high tolerance for pain) or when I get a laugh over the bologna of something rediculous. I was reading the laughter sections of Reader's Digest and cracked up - in the middle of the doctor's waiting room.

Life is, as you say, far to short to bother living in the negative.

You should see the laughs in the September issue - they are a humongous hoot!

Read it, Lori. I laughed just about all the way through it.

OK, I love humor, but what IS that picture? The Fat Fairy who brings calories? Male or female or who would really care with that shape! Why the waterfall? Kinda reminds of Divine, the late 300 lb. transvestite movie star of sainted memory:-)

Why that's a butterfly, Maryanne...a cross-breed butterfly on steroids. LOL And I think the fella that posed for this one was very brave.

Well it's an excellent message here. But the butterfly was the best. Only I thought it was a fairy. Of course there are waterfalls.
~ Janet

Found your blog through Carlynne's, and I just want to say that I love this post.