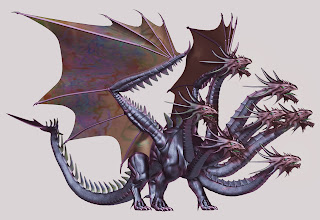 "The Hydra is first mentioned in the Greek myth of Hercules, in the golden age of the culture (500 to 300 BC) when the hero, as one of many jobs, had to kill the Lernaean Hydra The most famous of the Hydra species.
The descriptions vary, but they always mention an aquatic serpent like creature that lives in a subterranean cave in Lernea Lake in Greece. It is described to have many heads (the number can vary from 3 or 5 to 10 to 100 to 1.000 and even to 10.000); the reason for this is that when you decapitate one head of a Hydra, two will grow in its place."

I have long thought of the myth of the Hydra as being representative of the complexities of the problems we often experience in life. Sometimes, it's not as simple as cutting off the head and waiting for the problem to die. Sometimes, we have to stand back and look at the big picture, see the monster for what it is (a big scary sumbitch) and gird our loins accordingly.

In the US, today, we are up to our collective asses in Hydras. We are surrounded by greed, poverty, ignorance, intolerance, injustice, malice and superstition. It often seems that if we gain a little victory over one issue, another two pop up in its place. We are frustrated, frightened and, too often, looking for someone to blame rather than trying to find progressive and effective solutions.

The US has created its own Hydra. It has scales of greenbacks, teeth of want, the anger of ignorance, and the poison of lies spews from its mulitple mouths. The head to be feared the most is that of ignorance. The blind acceptance of the words of the wealthy and powerful, the need to have others do our thinking for us and the assault on the human necessity of a good education has weakened us. People actually support those who would enact laws that are in direct violation of the these same voters' best interests.

I remember talking, years ago, to a woman who was sweet but not well educated. She was insisting that something was true that was not because she said she read it in the newspaper. I asked her what paper and she, triumphantly, showed me her copy of the National Enquirer. Ohhkaayyyy. This copy was stating that LBJ was behind labs that were experimenting on intergalactic aliens. I have finally realized that a biased and controlled media is also one of the heads of the Hydra. There are those who will believe that there IS a Bat Boy that was found, living in a cave and that Elvis was a secret agent and is living in Russia after faking his death. There are those that will believe the POTUS is a Kenyan Muslim and will never be shaken from that erroneous belief.

With gullibility of this nature, why not have a program on a so-called "educational" network about ancient aliens whose existence is postulated by pseudo-scientists with bad hair? Why not have Jerry Springer and Maury and Storage Wars and all the dumb stuff for dumb people that is aired on TV? Why not have religion trying to take over the law of the land? Hell, we rank and file Amurricans will believe anything.

I finally have arrived at the conclusion that we need to stab the Hydra in its heart. Our system needs renewing, renovating and a big cleaning job needs to be done in our Congress and various state legislations. We need to put new bricks in that wall between Church and State and reinforce it with rebar and concrete. Without this kind of action, the small minds and greedy hearts that are running the various shows will just multiply.

We can only do what we can do. We can speak out, stand up for the principals of equality and dignity and higher learning. We can vote, we can write, we can blog and we can, at least TRY to kill this monster that is taking us down. I have no idea of how successful we can be, but I do know that if we do nothing, then we deserve what we get. And that is the truth.
Posted by Robin at 1:28 PM

There is definitely a plethora of hydras in this country. I think of cutting of the head of the hydra as putting a bandaid over our issues. What we need to do, is go to the root of the issue.

It is all but impossible to know where to begin and sadly I don't think the Hydra HAS a heart...