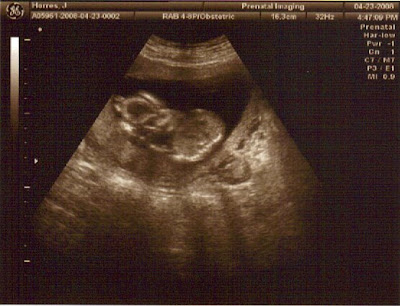 This is the very first picture I received of my newest great-grandson, Sean. He is now a healthy 4-month old. He is the grandson of my reunited daughter, my firstborn.

Sean comes into the world with his heritage intact. His genetic relatives are alive and kicking. Those of the adoptive variety are deceased or scattered. I and I, alone, have the honor of being his paternal great- grandmother.

Sean's big brother and his cousins know that Grandma was raised by other people, but that I am, in my oldest great-grandson's words, their REAL great-grandma. I am the one that sends Christmas and birthday gifts and receives the pictures and relates the stories about the cute things they say and do. There is no confusion or misunderstandings about why they have full lips, straight hair or big feet.

I hope you will forgive me a bit of a "so there!" attitude on this one. All the attempts, by the industry, the social workers playing God, and the adopters trying to live a fantasy, to wipe out the natural heritage of my children, grandchildren and great-grandchildren has come to naught. Their socially engineered "solution" to my problem and that of my daughter's adopters has faded like a fog in the sun. Yes, we have the scars from that weird transplant surgery called adoption, but they are not crippling us for life and have not hidden the truth from the world. I am here, alive, available and honest about it all.

My reunited son also has the full story. I was noting, during a recent phone call, that he has a mannerism very much like one of my mother's and my raised daughter's. His reply was that you could "take the boy out of the Kinneys, but you couldn't take the Kinney out of the boy." I think that is a testament to the fact that the entire idea of secret, closed, coerced adoptions under the auspices of an intolerant society, has failed, completely.

Those trying to protect this struggling, sick dinosaur by filing suit to try to keep records closed, by closing off so-called "open" adoptions and raising the non-existent specter of (natural)Parents' right to privacy are spitting in the wind. Whether it happens in my lifetime or down the road, the beast is dying of internal rot. Adoption agencies are dropping like flies and all the corruption and child-theft is coming to light in the world at large. Mothers of adoption loss from the closed, secret era are making noises that repute the right of the nay-sayers to speak for them.

It was while organizing my photos and lingering over those of my great-grandchildren, the ones the industry would have prevented me ever knowing, that it came to me that every word we type or speak is being read or heard by someone. I can get discouraged at times, but I stood back and took a look and realized that what they are hearing are the first tremors of the earthquake to come. The industry and those that benefit from it are hearing the rumblings and feeling uneasy. I love to watch the adult adoptees, our children, rattle the chains of the status quo.

The dinosaurs were eradicated. The saber-tooth cat and the mammoth are no more. But life goes on. It will go on long after I am gone. And the best thing is that ALL my descendants will know from which branch of the Tree of Life they grew.

To those who shamed, punished, coerced us and tried to silence us; Ain't this a kick in the head?

Thanks for sharing this. I am fascinated by how the children and grandchildren of adoptees view the APs and extended family. From what I have been able to find, many of them seem to understand that at the most fundamental level the APs are not true relatives, no matter how hard everyone tries to maintain the pretense. This is a big "in your face" truth for the adoption industry!

Congrats! This is a beautifully, wonderful view of the inside! Conception and pregnancy are fascinating to "look into". I think everyone who wants to adopt ought to be forced (mandatory counseling)into viewing videos of a growing fetus, and the birth process, and breastfeeding, so they'd think twice before they grab a new mother's baby. You have every right to claim your spot! Blessed Be.

As usual, you speak the truth. What a wonderful perspective you have, not just from your grandchildren but from GREAT-grandchildren! How great is that? It's almost as if you've erased the adoption completely!
I do not understand how adopters and potential adopters think they can just take a baby and make her/him their own without any problem. They truly are living in a fantasy world. Not everyone "deserves" to be a parent. It's not a right. Children should not be bought/sold. It's a sick commentary on our society.
Kathy

I meant to comment on this when you posted it, first off what a great way to see the baby, the inside view is very cool.

As usual you speak the truth, and I agree with everything Kathy said. Once again you are right on target!
Mary

This is a beautiful post and I love seeing new life inside mothers.

the best part about seeing this is your genes will be carried on with this NEW life!

WE are mothers who gave life and it is continuing, like nature was intended to do.

Congratulations on your great grand son!!!! And, I'm happy for you, that your family has been reunited!!!

May the adoption industry die soon and quickly.

You know you look WAY too young and hip to be a great-grandmother, Robin! :) Things have changed since the great-grandmothers that I knew growing up. Well, they didn't use the Internet, though. Maybe that's the secret to staying young.

Congratulations on that beautiful baby! Wow, you hear so many stories about families being torn apart by adoption for generations and it is truly wonderful to see how yours was brought back together again, despite the horrid adoption industry's attempts to tear it apart. You deserve your "so there"!

As always, your writing gives so much insight into what mothers who lost children to adoption actually feel. Thank you for being brave enough to talk about how things really are.

Robin,
Your blog rocks. Thank you so much for writing and being a voice for so many. It definately is not in vain. Never ever stop.

My aMom is in the hospital and I just spent the morning going through old pictures at her house, as I am having to organize her house (alone) for sale for her move to a nursing home. Talk about conflicting emotions as an adoptee. I have so many memories (some good, some not so good, some where it felt right, but alot where I felt oddly out of place) and yet it is so hard to admit to this and also integrate it all into my life and heart and mind. I cannot negate the love in my heart. Nor the pain. The pain of not being related by blood to the family who raised me, and how it felt oddly different somehow all the time. And the pain of being away from my relatives by blood and the peaceful rightness and connection I missed out on and only realized what was after reunion and waking up. How can I integrate this. Who was there for me, who was ripped from me, who greived over not being allowed to mother me (because of societal pressures), how adoptee's emotions are locked into nothingness by the stroke of a pen and all that means.
Thank you for helping my emotions wake up so I can somehow become whole, through the pain, and integrate what happened into who I am. Bless you.
Peach
Congrats on your new great-grandson!