The Myth of the Triad 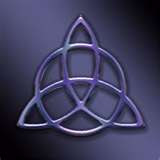 Probably the most misleading concept to be brought into the adoption arena is that of the so-called "Triad." No one has said it better than Bastardette did in this post to her blog back in 2007.

No matter how it is drawn, triad means triangle...three equal parts with equitable powers that make up a whole. Adoption "Triadinists" use the natural mother, the adopters and the adoptee to symbolize their concept of a triad.

I've said it before and I will say it again. There is no such thing as an adoption triad. First of all, and thank you for this sentence, BD, "surrender does not equal adoption!" I just love that truth. We did not surrender our children to adopters. We were backed up against the wall and had to wave the white flag for agencies, the state, lawyers, our parents and social workers. We were the source of supply, only, and our rights ended where the facilitators' began. How can we be considered an equal partner when we were stripped of all autonomy from the get-go? There is NOTHING equal about what happened to us or to our children who are still being denied, in many states and provinces, the simple right to their own, true identities.

If we held up a scale, and placed the powerful on one platform and the powerless on the other, we natural mothers and our children would be hanging on for dear life to keep from sliding off. If the industry ever gets honest, which I believe will happen when it snows two feet at the equator, the general populace will be appalled.

The triad is another myth, misleading as were the things that were said to us when we were being warehoused and stripped of our parental rights. It's just another industry trick like "open" adoption and post-birth "counseling." In my opinion, a social worker with an adoption agency counseling a mother who has surrendered is like a murderer counseling the loved ones of their victim. This is why there are so many groups for mothers to get together and for adoptees to share experiences with each other. We cannot get compassion, understanding or cooperation from anyone but our own.

That triad weighs a million tons and it is sitting on our backs. Getting out from under is a fight but we are a scrappy lot. Adoption is an INDUSTRY and big business and the bottom line and spin doctoring have no place when the life and future of a mother and her child are concerned. The self-entitled are the market and the facilitators are coming up with all manner of ways to fill the demand. They have to be more creative, these days, than they were in the EMS, but, they still manage to play that religion card, appealing to the puritanical and the rigid.

So, the Father, Son and Holy Ghost are a triad. Executive, Legislative and Judicial are a triad. Peace Love and Hope are a triad. But, there IS NO TRIAD IN ADOPTION.

You and I must be on the same wavelength today because I just posted a blog about this, after being (once again) highly annoyed by biased adoption coverage in my morning paper.

Hi- I'm a 40 year old adoptee and I'm not even sure how I wandered onto your site, but I'm enjoying it enormously! I have read a number of your older posts and love your voice and what you're saying. I'm sorry to post this as a comment, but I couldn't find an 'email me' link.

Thanks for your blog-- I'll check it often!

ah...thanks Robin. And in my 26 year reunion with my daughter, they also held the cards with the highest points. Not all the cards, but I was never an equal in their mind. And jane, see-sawed back and forth.

Anon, maybe, in reunion, it is our expectations that are disappointed. All involved are human and I am beginning to see that the meat grinder has also given many of us very unrealistic expectations across the board.

Mothers don't have the cards, either. It's the adopters and the industry that are in the top cat seats.

Thanks for heading people up on my blog.

After I read what you just posted, I went over to Google Images and looked at triangles and other geometric shapes and can find nothing there that relates to adoption structure. Somebody always comes out short, equal or overbearing.

I've found it amusing that people are hung up on this. We have, in no special order the "adoption" circle, triad, triangle, constellation, pentagram. While geometry may explain a lot of things unless one is some high fallutin' mathematician (maybe) geometry just doesn't cut it in this case. Besides, it's something deformers always use at hearings when they want to look reasonable and nice and kiss ass.

Hey, maybe a cross would be a good analogy. A long horizontal plank on which mothers and bastards get nailed. Oh, did I say that? I think I'll copy that thought on to Bastrdette today as I await my use to write the last two paragraphs of the long piece I'm working on.

There's always the garbage can analogy.

That's funny. Hanne reposted this entry on FB. It looked familiar, but I thought it was new anyway. duh! Anyway, it always good to read again.