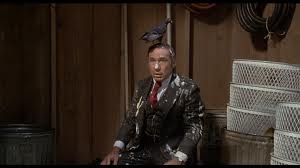 I was in an inpatient facility for six weeks for an eating disorder. I learned a lot about what makes us use our drug of choice (in my case, food) and why we react to so many situations rather than making a thoughtful response. I learned the dangers of comparing my insides with the outsides of others. I figured out that I was a perfectionist and prone to dichotomous thinking and that I let old tapes about my lack of personal worth play on and on in my mind. I learned, most importantly, that I cannot control a damn thing but myself.

Life is an ocean and the ocean has waves and storms. In less poetic terms, shit happens. In those six weeks I heard more breast-beating, mommy and daddy-blaming and self pity that I thought existed. What bothered me most is that some of it came from me. I could, in that environment, step back and see that I was playing the tapes of "more unworthy than thou" and first learned the meaning of "Terminal Uniqueness." It was also in that environment that I heard words of common sense and hard-earned wisdom that stay with me to this day. Minnie O., bless her heart and may she rest in peace, a tough old raspy-voiced survivor of alcoholism and compulsive overeating, had a bit to say about our therapy. We listened because she had been in recovery longer than many of us had been alive.

Her other favorite was, "When I was young and they did this to me, shame on them. Now that I am an adult with the capacity to understand, if I keep whining about it, shame on ME." Her answer to that was to reach out and help others and it kept her sane, sober and at a dull roar with the food. One woman, who was abused as a child, kept crying about it. Minnie asked her what she had done about it. "It's a terrible injustice," she said. "Why not do what you can to speak out against that injustice and maybe help some others and learn how to live well in spite of the fact that it happened to you?"

Wow, what a concept! There comes a time when you start sounding like a broken record if you don't take it to the next level. I can sit around and talk about, cry about and relive the pain of losing my children to adoption all day, 24/7. OR, I can address the injustice and make things a bit hotter for the industry. I think I'll take door #2.

We've all been through a lot of crap, adoptee and nmoms. For the majority of us, none of it was our fault (moms and adoptees) nor were you unloved and forgotten (adoptees). Like the child who is born with a genetic defect and learns to live well with that defect (see references to Stephen Hawking from my previous post), it all falls into the category of "shit happens." The thing is, are we going to let the Industry and the NCFA and the legislative toadies get away with it, scott-free?

Anger is just an emotion, neither good nor bad, neither right nor wrong. Finding a constructive and worthy outlet for that anger is a lot better than letting it fester inside us, warping our perceptions and fuelling poor choices. I learned this from my treatment and, mostly, from Minnie O. I don't do it perfectly because it is a process and a journey..not a permanent fix nor a destination reached. But I am a lot happier for keeping at it.

.
We're all special but none of us are so exalted above or pushed below others as to be so very, very unique. I'm okay as long as I remember that I have no control over anyone or anything else but myself, that life is real and that shit happens.
Posted by Robin at 10:27 AM

I like this post! It reminds me of the day I woke up and realized that I had been having a rant in my head, every morning while showering, for literally years. I was ranting and raging at the people who railroaded me into losing my daughter. The same tape played on and on, I got angrier and angrier and then one day I noticed that those other people were just going about their business. They weren't thinking about it, didn't hear my rant, just had a merry ole day. I wasn't hurting them, just making myself miserable. I finally figured out that I could control what I was thinking about and had to change it. And that changed everything else.

I am still learning this, but it gets easier every day. I realized that while I blog and yell (figuratively) it takes for another to actually hear it to understand...so, I blog for me, I blog to show a few of those young women out there that life is not over when they have a child or even when they surrender a child....

I guess that is why I am getting healthier after a lifetime of self-destructive behavior...

How funny that I did not read your post until after I had written mine!

Great post, "What have you done to change?" is always such a good question.How fortunate we are to meet Minnie O's in our lives.
Love to post a link if I may.

I really like what you say about acknowledging what is beyond our control, and acknowledging feelings, and then trying to come up with a way to integrate things and get the ass out of the ditch.

It is not an simple task, and it certainly is easy to get stuck in the spin cycle of self-reference.

I am not quite sure yet what my plan out of the ditch will be, but I am glad to be in such good company in finding my way forward.