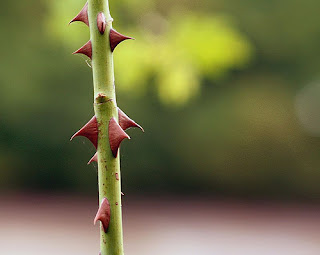 In having discussions with my own reunited children and other adult adopted people, especially those whose Natural Mothers were less than welcoming and loving, I have seen a truth that lays in my stomach like jagged rocks. Rejection from either end is a singular type of pain. These people hurt for real. That pain cannot be ignored or dismissed.

I have characterized, on occasion, some adoptees as being "needy." Well, OF COURSE THEY ARE!! The first lessons a child learns of lovability, worth and acceptance are learned in the arms of his/her real mother. Deprived of that and then placed into the arms of a literal stranger who doesn't feel, smell or sound 'right,' then the first message that child receives is garbled and confusing, no matter how kind and loving the adopters.

The problem is in finding our way when we reunite as adults. It's to late to undo what was done. And I have learned that all the love and acceptance in one's capacity to give is not enough to heal either party. When a Natural Mother, steeped in fear of reliving the old pain, still feeling the shame, old tapes playing in her head and old lies heavy on her heart..when she closes the door to her adult child, the problem is often compounded, tenfold. She gets no healing and her child is further hurt. Unfortunately, we all, mothers, adoptees, John and Jane Doe on the street, have the constitutional right to decide with whom we will or will not associate. Right or wrong, fair or unfair, that's the way it is. One person's rights end where another's begins. That doesn't change the fact that rejection hurts.

A lot of these mothers don't seem to be able to separate the person of her child from the trauma of the experience. That seems to be true with a lot of women who were raped or were the victims of incest. How I got past that feeling with my son, I don't know, but I managed to separate his existence from his conception while he was still in my womb. I think I just needed and wanted a child so very much after losing my daughter...but I was not allowed to keep him, either.

If the adopted adult is already feeling anger, bitterness, and has been given or invented and imagined false and demeaning information about the mother and is then rejected, "Katy, bar the door!" That anger is so virulent it spills over onto the mothers of other adopted people and we fight back. If their experience with their adopters and adoptive family was painful, we have a wounded tiger. Underneath all this, is an aching sadness that is only thinly disguised by the anger. I have learned that anger is, more often than not, only a surface emotion and that there are layers and layers of sadness, confusion, fear and other emotions underneath the surface turmoil.

Even if accepted, if an adopted adult is in that "testing" stage where they want to manipulate their mother into proving her love and fixing them, and the mother backs away, responding to the simple instinct of self-preservation, then they can let the Hounds of Hell loose upon ALL mothers. It's not right but it is human nature. The thorns prick us all. Even good reunions have bad moments.

Quite an few of us Natural Mothers have made, and rightly so, the statement that we are only mothers to our own surrendered children. We will not bear or accept the punishments and blandishments meant for the rejecting mothers. We will not be referred to as breeders, birthers, abandoners, bio-abandoners, or egg donors and it is not our responsibility to make up to the adult child of another woman for the shortcomings of their particular Natural Mother. We do not stereotype you...don't stereotype us and don't judge us all by your situation.

Having said that, again, clearly, I have to admit that my heart hurts for a lot of these people who feel they need that maternal affirmation/acceptance in order to be whole. Were it possible, I would be mother to them all. I would gather them all in my arms and sing lullabies and give love and do all in my power to take away the hurt. And it would all be in vain. I am not their mother. I am only mother to my own children.

I was watching on one of the science channels the other night, a program that was examining the mysteries of the Universe. They were talking about how all of the things that make life possible on this planet came from the stars, comets, nebulae, etc. We are all made of the stuff of stars. Break us down into our basic chemical components and you will find those same elements  in asteroids, meteors and even hot, burning suns. Inside each of us is a completeness that we must look inward to find.

It is good to have others in our lives, to have loved ones who see us as important and need us. But it is more important to accept and love ourselves and find what we need within us. The mother bird pushes the chick from the nest and says, "Fly...go be a bird." Parents age and die. How could any of us go on if we haven't realized our own right to be here? If we remain dependent on others for our emotional needs, then we die of emotional starvation when a feast is available within our own beings.

A lot of people see the "Desiderata" (Max Erhmann; 1927) as trite and overly simple. But there is one passage in this well-known piece that I carry with me at all times. It helped me through my own dark wanderings. "Nurture strength of spirit to shield you in sudden misfortune. But do not distress yourself with dark imaginings. Many fears are born of fatigue and loneliness. Beyond a wholesome discipline, be gentle with yourself. You are a child of the universe, no less than the trees and the stars; you have a right to be here. And whether or not it is clear to you, no doubt the universe is unfolding as it should."


So, as children of the Cosmos, we are all bound to each other in a kinship that surpasses the mundane. To my adopted friends, look at your tummy and observe your navel. It proves that you came into this world through the same passage way we all traveled. You have a right to know WHO, you have a right to seek out other adult, natural family members to ask your questions and you have a right to be happy with who you are, as you are.

I also find myself wanting to mother the motherless.

You said "A lot of these mothers don't seem to be able to separate the person of her child from the trauma of the experience.". This was so true for me. Once I was able to separate the infant child I lost to adoption from the man I was getting to know through reunion, it became much easier to heal. When I find myself having bad days now, thinking of my son as Christopher the infant, I can realize that it is the trauma of the loss that I am reacting to at that moment.

This is beautiful, eloquent and truly speaks to the heart. Thanks for this lovely post, /Robin. Your best work yet!

As a mother that separated the toddler from the woman, I found that no matter what, I don't know her. As long as she lives in her little fox hole of pain, does not allow anyone to love her for long, there is nothing, nothing that I can do for this young woman.