Birthdays Are Getting Better 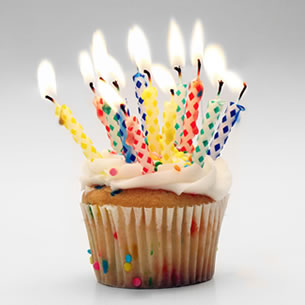 I think one of the hardest things for Nmoms and Adoptees is the birthday. I noted, on my daughter's card, that her birth is the one thing that no one else can share with us...it happened to the two of us and no one else. When you are in the limbo of closed, secret adoption and not reunited, birthdays are horrible. It is the anniversary, for many of us, of the beginning of the end.....Motherhood legally deleted and baby gone away...not a good thing to remember.

I had a ritual during the years we spent apart. On each child's birthday, I would buy a cupcake at the bakery, put in a candle and go off by myself for a bit. Often I cried the entire time I was "celebrating."

My daughter's birthday is Wednesday. April is such a lovely month but it was always hard for me to get through as was June, my son's birth month. The cards I send each year are an affirmation that I have mourned the loss of my babies and accepted, with love, the presence in my life of these two adults who are my flesh and blood.

I mentioned, in my previous post, that I considered myself my children's only true mother. I need to emphasize the "I" there in that sentence. My children know how I feel. They also know that I respect their feelings for those who raised them. That is how I, personally, feel, many of my adoptee friends also understand that feeling in me and it hasn't been a "deal breaker" for my reunions. I can never and will never bow at the altar of the adopters.

One reason is that awful concept of "Gotcha Day." What idiot adopter thought that a child would like this kind of celebration? Their birth is as important to them as non-adopted children. To me, that Gotcha thing is as inane, facetious, and distasteful as female adopters taking hormones and trying to breast-feed their acquired children.

One thing that I have learned in the past 17 years since I emerged from the good beemommy fog is that adopters are NOT a lot of things. They are not perfect, saintly, superior or deserving of praise just because they got what they wanted. They are human beings. They make the same mistakes that every one else makes in equal proportion. They can be hateful, hostile, possessive and insecure. A few develop the ability to bite their tongues and be concerned about what the adopted person needs. I'll bet that's hard to do.

I will never tell an adopted person that they shouldn't love their adopters or see them as rightful parents. That is their prerogative and not mine. I will respect how they feel. They have a shared history with these people that we, unfortunately, were denied. Just don't expect me to love them, too. Don't expect me to put up with hostility with my head bowed. For the sake of my children, when this has happened, I would just shut up and back off. But I kept my back straight and my head high when I did. I don't hate the adopters, and I am really no longer angry at them so much as I pity them their insecurities. I believe in civility, and respect is a two-way street. It might be hard to treat, with respect, the woman you throught of as a threat and a personal brood mare. But it can be done, and should be.

If I have any message for those who adopt, it would be that I did NOT give my children to you. I gave YOU to them because I had no other choice.

I also refuse to see myself as a part of any so-called "Triad." There is no equality in adoption and there are too many other players in the field to come up with a discernible, geometric representation of the experience. To me, it is nothing more than a great, big cluster F***...painful, confusing and damaging.

But, since I have reunited with my two adult children, I have finally mourned the forever loss of my babies. I have mourned the years we missed when birthday cards and calls and other things were impossible. I have come to terms with and have learned to direct and use my anger at the injustices done to us...Nmothers and Adopted. Those who say you don't make progress, don't try.

And yes, Birthdays are easier than they were, for me, anyhow.
Posted by Robin at 12:44 PM

I am not quite there yet, but it is better than it was four years ago. (((((Sandy))))) and Happy Birthday to your daughter, and to you.

......I did not give my newborn to adoptive parents. I had to surrender her to Children's Home Society of MN. They, in turn, offered her to a married couple, in exchange for money.

Today, after many years of sadness, I LOVE my daughter's birthday. It is the one day of the year that is ours - forever.

You made a really good point when you said that there is no adoption triad. So true! Now that I think about it, I can't believe that I never really realized that.

Adoptees and firstmothers are the only ones who truly impacted by adoption and the majority of the time adopters could care less about either of their feelings.

Happy Birth Day, Robin! I love that you said that this is a day that's just about you and your child. So true and so easy for some people to try to ignore.