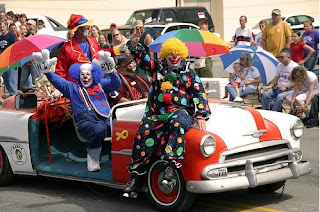 The GOP candidates arrive for another debate! It's Tea Party Time!!

I never thought I would see the day that a group of candidates for the highest office in our nation would deliberately tell whoppers, misinform voters and generally show their racist bias in such an overt manner. I know that there have been lies told by politicians from day one in this nation and others. But to do it in such an in-your-face manner is criminal. The fact that there are those who buy into these lies is just plain sad.

For years, the lies about adoption persisted. The fact that the truth is coming from those of us who experienced the mistreatment, grief and shame makes no difference to the spin doctors. We just get dismissed as bitter and angry.

Now, we are being lied to about everything we know to be true and they just don't care. Faux news will make things up as they go. The GOP candidates try to rewrite history. They don't know as much as a 6th-grader knew about history and civics in my day.

We are approaching an Idiocracy and, if you don't believe me, go visit the "Birthmom Buds" on Facebook, listen to a speech by Mispeak Bachmann or try to argue with an avid "birther" about the fact that the President WAS born in the US. Willful ignorance is going to take this nation down if we don't stand up, not just for the rights of individuals as put forth by the Constitution, but for TRUTH.

I can see the drive for open records being detoured by the Corporate Congress and the state leggies who have had their palms greased. I can see no chance, at all, for the "sinful, sexual" Mothers to even ask for, much less receive the justice they deserve. How can we when we still have idiots who use the old "no one held a gun to your head" and "you're the one who spread your legs" arguments and think them valid?

We are no longer trudging up a long hill. We are climbing Everest with no equipment except the frail rope of truth. Like everything else in this corporate culture, truth has become a commodity and can be anything anyone wants it to be if they have the money and the connections. We have entered the Twilight Zone of American politics. Statesmen have been replaced by celebrities and proselytizers. There is NO government of, by and for the people. It has become the playground of the Kochs and the Murdocks and the DeVoes and their ilk.

It is a truly bizarre circus and the clowns are truly scary. But we must have clowns, so send 'em in. Oh. Don't bother. THEY'RE HEEEEEER.
Posted by Robin at 10:04 AM

So sad but so true. My generation is SCREWED! God help us all....

I teach - and the whole thing scares the crap out of me! Because it isn't just politicians, it is education! The willful ignorance is taught from the cradle - Children today have no education, barely know American History, don't know American Constitution and think potatoes come from a box!

If you read a paper - well, don't bother, between grammar and spelling, it takes me an hour to get past the front page!

News? Okay, I know that someone thinks it is important, but I don't care which celeb is dating who and really don't care if so and so had her 8th baby - None of it is news! That crap used to be in tabloids!

And whether anyone likes it or not - Obama is a good president! He thinks about the people and the path that this nation has taken into clay feet oblivion.....

Sigh, and forget liberty, equality and justice - it doesn't exist in our reactionary world...

Lori,
I agree. The education things scares me a lot. I worked at a university and the biggest complaint that the teachers in the MSW Program had was the the students COULD NOT WRITE! Sometimes over half the classes got automatic failures due to plagarism and the lapses in grammar were unbelievable. They were all but impossible to read. If these students made it to college, and into the MSW Program, imagine what the rest are like!

What I am most disturbed by is the fact that one of their bully tactics which seems to be very effective is one they used on us, too, to silence us. They keep telling us that we are lying, that it didn't happen and the more insistent we are, the louder and more vulgar they become that we are lying. For an example of that, check out Craigslist. That's a forum, but I have had the same exact things said to me to my face! And, then they stick out their chests, get in your space and look down while raising their voices. Classic bully tactics, but the more often you tell it and the more authority with which you deliver, the more people believe it no matter how absurd.

The Theocratic Clowns...seem lately to be The Biggest Show on Earth. I am so, so tired of the words Christian and Religion...any religion, anywhere on earth. You don't even have to buy a ticket for this Show...this ticket *appears* to be free(there is really a high cost to it..bait & switch)and foisted upon you..whether you like this Show or not.
I have always been against any person in political office ending a speech with the word...God. I smelled trouble a long time ago. And I sincerely doubt, if a God even does exist..that he/she would approve of "In God We Trust"...on money. That is simply ridiculous...and I think a God would agree with me.

Agreed, Chris. I have been uncomfortable with this whole thing since the early days of the "Moral Majority." They were wusses compared to this bunch.

We're not going back.
I think the gay men and lesbians and transsexual people really blazed the trail for us, speaking up and demanding acceptance for who they are. They stand up to the religious bullies, and it's up to us to do the same.
And you know what? Standing up to bullies works. I was just watching C-SPAN's coverage of the congressional hearings on same-sex marriage yesterday. One of the speakers pointed out that when the cruelly misnamed Defense of Marriage Act was passed, in 1996, there was no jurisdiction in the world where same-sex marriage was legal, nor domestic partnerships either. Look, now: Spain, for heaven's sake, Iowa, all sorts of other places all over the world-- marriage equality is coming in hyperdrive, and all because people are standing up to the religious fanatics.
I know the ignorance and idiocy is frustrating to witness, but I don't think this was ever a well-educated country. (I don't think there has ever been a really well-educated country. Individual people tend to resist education.) Historically, there was only a big push for everybody in the US to finish high school after World War II. The standards for high school started eroding, and then the colleges quit flunking anybody, and now we have semiliterates in grad school.
But it doesn't matter.
We're not going back.