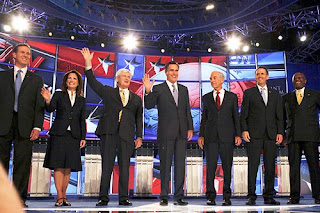 Dear Republicans,
I'm not sure, but I hope I am writing this to a group of real people. You see, I probably am a naive idealist, but I have to think that there has to be a way to get the realities of life across to you. I am a senior citizen. Yet, I still have hope that there is compassion and decency in the vast majority of human beings.
I know you don't want there to be a Democratic president. I fear you REALLY don't want a mixed-race, Democratic president more than anything. But is it fair for you to engineer an economic disaster that will take us all down, except for those of you who are wealthy, just to try to destroy one man? And why do you seem to think that none of us see what is happening and why? I feel, somehow, disrespected as a person, a woman and a senior by the tactics you are using. I am neither blind, brainwashed or ignorant.
In my lifetime, I have seen statesmanship left behind and replaced with political idealogues, I have seen the incremental destruction of everything socially and politically good that came out of the first 70 years of the last century. There are babies out there, on the ground, crying because they have been thrown out with the bathwater. I have seen the decline of truth and the rise of the spin doctor. I have seen a nation grown so lazy that they depend on media sound bites rather than researching the candidates before voting. I have seen an educational system so crippled that it is turning out functional illiterates.
I started out as an activist in the area of adoption, specifically, coerced surrenders of the Era of Mass Surrenders. I always looked in wonder at the attitude of adopters or PAPs who felt they were entitled to the child of another woman, just because they wanted one. Now I see where they get it. Most of you are attorneys that have been elected to Congress and I have never seen such a bunch of self-entitled people in my life, except, perhaps, the corporations and financial fat cats and hedge funders that line your pockets.
Yet you call the pittance that we have worked for and paid into all our working lives an "entitlement?" I call Social Security a promise and a deal. I call Medicare necessary and paid for with OUR money. And I call social programs that help feed, house and educate the less fortunate among us, especially children, COMPASSION.
Capitalism, on its own, is a ravenous beast that consumes and acquires with no thought of consequences. Without social programs to balance things out, our system becomes even more corrupt and ugly than it already is. We WILL fight for the social conscience that keeps our nation from becoming a complete corporate-owned plutocracy and theocracy.
And yes, while we are at it, what IS IT with this evangelical overload? Not only have many of your number thrown the Constitution to the ground, but with this aspect, you tread all over it with mud on your shoes. America is a nation of multiple beliefs and non-beliefs and it should remain that way. I don't think "freedom of religion" means just freedom for one segment of believers.
President Obama has offered the olive branch more than once and you have hurled it back in his face. Oh you good Christians, you. He has offered programs to help our nation and you look, not at the merits of the program (similar to many passed in bipartisan actions over the years) but at the source of that program and you sneer and reject. We want that program. We need it. But you are in that "my way or the highway" groove.
I know a lot of self-proclaimed Republicans that seem to be decent people and they are looking somewhat embarrassed, these days. They still puff up and flash their "Nobama" buttons, but they are wondering what happened to their 401Ks and retirement as well. And they are not real keen on Social Security cuts or Medicare cutbacks. You're walking a slippery slope with those subjects.
You want us to blame President Obama for his predecessor's excesses and your stubborn pique and that's not representing the people. That is a vendetta and not a pretty one. Maybe you need to step back and remember that you, whether you are well to do or not, are just one of the herd and that the strength of the working class makes or breaks any nation.
Of course, I look at the picture of the current GOP candidates and find myself, an agnostic, praying that none of these people defeat the President next year. That would probably put an end to my American citizenship. I have lost trust in you and in your motivations. So hope you don't win 2012 or you will have a nasty situation on your hands. Hungry, desperate people can get angry and determined.
I'll just get out if I can, should that happen. I'm too old for your nonsense. Here's some truth for you. 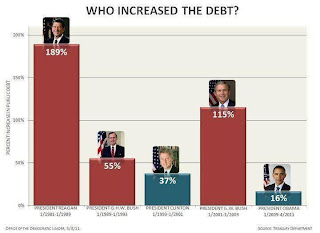 I SO hope you are putting this in the mail....! Excellent...

I have printed out copies...enough to send to the main players and the candidates and our rethug senator from my district.

Right On, Robin! You say it so well! Thank You! Kathleen