Legacy of Greed and Arrogance 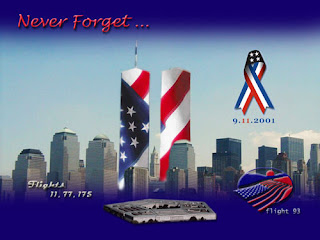 9/11 has left us with a curious and terrifying legacy; asshats, motherf***ers, and bullsh***ers as far as the eye can see, bad things happening to good people, bad people getting all the dough and all the power, and good people watching their homes burn or washed away in a flood and people in Africa starving while a bunch of pin-headed, self-righteous redneck, evangelical elitists and greedy power-mongers glad-hand, campaign and make back-room deals.
These influence brokers used the fear generated by the cowardly attacks of 9/11, ten years ago, to erode our freedoms and break the back of our government. Bin Laden got what he wanted.
Racist bullies, liars and hypocrites sit in their snug little ivory towers and rain down hate rhetoric. Inane/insane pundits burst our eardrums with their messages of hate....This goes beyond party and philosophy and into the heart of the human race where it is festering and about to blow. They wanted to use fear to control the populace. Well, good job, Sh**eaters! I am definitely afraid. But controlled? Not yet.
I fear a return to the dark ages, an elite class that celebrates the ignorance and fear of the masses while they control access to everything that makes life better...education, creativity, art, music, freedom. I fear a time when the public becomes nothing more than voiceless drones. I fear a bloody rebellion, a destruction of something so precious, lost because it was taken for granted.
I see the seething anger and/or the exhausted resignation of the millions who just want to work for a living. I see a wife entering a church to ask for food. I see a man gathering scrap metal so that he can sell it to buy gas to look for work. I see elderly people wondering if they will die in poverty.
And I see a large dark cloud harboring a hideous, tentacled, Lovecraftian monster with many faces; Koch, Murdoch, Bush, Perry, Beck, Coulter, Rove, Cheney, Palin, Bachmann, Robertson, Cain, Paul, Devos, Exxon Mobile and tar sand blasters, pipeline runners and mountain cappers...not enough room to list all of the dastards.
I see book-burning, church-run "education" and emotions, especially love in any form, outlawed and punishable by law. Orwell just had the year wrong. Atwood is a visionary as well. History and literature have warned us but we haven't heeded the warnings and are beginning to pay the price. "Those who forget the past are doomed to repeat it."
Ten years ago, we saw the results of hate and religious fanaticism. It cost the lives of thousands of innocent people and left a scar on the face of our nation. I find it absolutely flabbergasting that the parallels are not recognized in the antics of Robertson, the Tea Party and praying candidates who fall to their knees while their states burn. Fascism isn't socialism, People!! It's intolerance and fear and iron control and fanaticism and it isn't just Islam that has a claim to those attributes. It is here in the fundamentalist, evangelical, end-of-timers Christian Dominionists and we should fear them just as much as the Arab piloting an airliner. There is an ACTIVE campaign to replace Democracy with control through fear, and to replace the Constitution with the bible. And YES, that would be a bad thing!!!
My time is coming soon, when I won't have to worry about it. I am in my "golden years" (*snort) and the worse will probably come after I am dead and gone. But I have children, grandchildren and great-grandchildren and a legacy of ignorance, fear and poverty is not what I would want for them.
For every time I didn't speak up, for the times when I was younger when I was too self-involved and reacted rather than researched, for all the votes I didn't cast because I was too "busy," I am so sorry, my Dear Ones. As long as I still have breath in me, I will protest and write letters and keep the DC switchboards buzzing. I will support that which speaks to the rights of all and fight that which gives the best to a few.
I just hope we aren't too few, too late.
Posted by Robin at 9:51 AM

Well stated and thank you. The news is all so bad lately as I watch the fires creep loser and closer to my loved ones ( barbie and Ryan were evacuated from work yesterday and those fires are also still burning as wells the ones by David and Kelley and they are getting closer to me, too) it is almost too hard to get out of bed, it is so discouraging. The speech gave me hope but the opposition takes it away...

Two days after Kerry got her job, the word came down to cut the work force and she was out. I cried for her last night. I don't often do that because she is a tough little thing and mad as hell, right now.

I watch as education begins to be nothing more than a way to teach kids enough to get a pitiful job that won't pay enough to feed themselves.... and teachers are let go of, instead of ignorant and dangerous people in positions that are civil servant jobs that have power to create fear....

I am afraid for the world... we are sliding into the dark ages.

The comment section of my local newspaper is really distubing. I never thought I would see the day when teachers were openly treated as the scum of the earth, but each and every day that is what is posted. And these very same commenters then claim the "job creators" need more tax breaks so they can continue to be paid obscene bonuses for "taking risks" and "improving efficiency" (which are really just polite terms for sending all the jobs to third-world sweatshops).

I am quite fearful of what will become of this great nation if we don't give everyone a proper education and a chance to earn a decent living.

Sisters, it is not exclusive to the USA. In Ireland, the beautiful country of my birth and that of my only child is in a crazy and, seemingly, unstoppable freefall to to total misery. My current abode, Portugal, is in an equally sorry state. Greed and arrogance are a worldwide phenomena. I would love to have phrased that in the past tense, but it would not be true.

Stay as safe as you can.

Sorry to say you are very right, Paula. Glad to hear from you, though, and Darrell says Hello. It is a global problem that the oppourtunists in each nation are trying to use to their advantage. It's terrible.