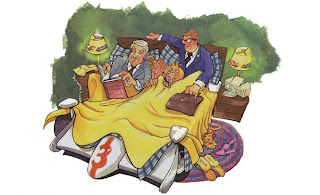 I have been more political than adoption-oriented of late. And I went through a long, dry spell when I just couldn't, with all the other crap going on in the world, work up even a little bit of the old passion and fire. But Rick Santorum....yes, that's right...Rick Santorum, Old Frothy himself has geared me up for another go.
I will never understand mothers of loss who adopt. And you can bet your paycheck that, once they do, the adopter trumps the mother, everytime. I have a harder time with women who went through the injustice and indignities of the BSE who vote for the anti-choice candidates and are content with extremist, right-wing MEN making decisions about birth control.
HAVE WE LEARNED NOTHING?? If we ever, ever get a shot at justice, it is not going to be on the specious prayers of the rigid, Dominionist right. As far as they are concerned, we are still in the 19th century and we are still sluts. There is a cartoon showing what the inauguration of Frothy would be like and it showed all the women in burkhas. That is NOT far from the reality that this man espouses.
While Santorum pushed me over the edge, I have been getting nearer and nearer to that precipice as I watch the GOP members of Congress at work. Are they debating job programs. Have they introduced any legislative solutions to the economic crisis? Hell no! They are too concerned with what goes on in our bedrooms and reproductive organs to do something actually productive. They are trying a strategy of flogging us with ideology while dazzling us with sanctimonious bullshit.
With a group of asshats like that in power, justice and adoption reform of any kind are just a distant dream. Yeah, I know the pro-adoption bunch sit on both sides of the aisle but tell me the truth. Can't we have a better chance with elected officials that try to respect the rights of women in general or am I going daft in my dotage?
Those of us in my age group, the mothers of the BSE, know what it was like to have no autonomy, little say in our own fate or the fate of our infants and living our experience as the daughters of Eve...responsible for the lusty behavior of the male 50% of our dilemma. We remember when we were held responsible if we were raped. It was all on our shoulders.
So we were good girls and tried to be the best mothers we could be and were constantly told that the best mother we could be would be an "un-mother" and that our children would really be grateful. Guess what. Most of them didn't like it worth a damn!
I had thought that we had come a long way from that oppressive time. But if we don't use our memories and if we fall for the Pharisee that shouts "Lord! Lord!" the loudest, we are going to lose some precious ground. The government will be in our beds, our healthcare and our reproductive decisions and we will be back in the same old boat. Screw that! There have been too many broken hearts, too many tears, too many relationships that are forever bent out of recognizable shape by an unnatural separation. There have been too many families torn apart too many times by people who HAVE NO BUSINESS MESSING IN OUR BUSINESS! 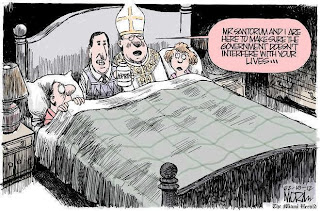 These are the same people who cry out for smaller government yet want to micro-manage the lives of women. We have to send a strong message to these good old boys. We have to boot them out of the bedroom and vote them out of our wombs. Our marital status, our decisions about contraception and pregnancy, our sexual orientations are not what government is about.
Jobs, healthcare, education, infrastructure....all these are the things to which our national government and our state governments should be attending. Any mothers who are in league with the extremist Far Right are into extremely strange bedfellows or else they are just masochists who can't use the brains they were born with.
Excuse me if I refuse to lie down with control freaks who want to tell me what I can and cannot do with my own body. There!
Posted by Robin at 8:40 PM

Yes, indeed, Robin. Just as adoptees who adopt lose their adoptee voice. They lost their voice once, and now they are taking someone else's voice. Boggles my mind.

Totally agree with this, too:

"These are the same people who cry out for smaller government yet want to micro-manage the lives of women. We have to send a strong message to these good old boys. We have to boot them out of the bedroom and vote them out of our wombs. Our marital status, our decisions about contraception and pregnancy, our sexual orientations are not what government is about."

Santorum is dangerous. I fear for women and their children. If contraception and abortion are not readily available and/or affordable, if social programs for women and children are cut, what do you think will happen? Yup...another "baby scoop era". I am thankful that in 1983, there were programs available for me to keep my baby. BSE Mothers did not have those same programs. BSE Moms and their children need to do their best to make sure another BSE does not happen.

Mitt and Ricky boy scare the bejeebus out of me.

I've already started volunteering on the Obama re-election campaign. In some ways the President has been a disappointment to me, but all the Republican contenders are downright terrifying.