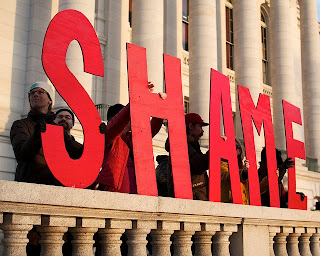 My friend, Sandy, aka, Musing Mother, wrote a deeply moving and profound post, yesterday, entitled "Where's the Outrage?" Good question, Sandy. Damn good question.
I have such a deep, emotional investment in the need for justice for the mothers and adult children who were separated during the BSE, given no choice, no help, no right to even grieve our losses. This need has been an open wound and the actions of the Australian enquiry that is generating an apology (which is a good START) to the mothers of their BSE was like pouring alcohol into that wound.
I am so happy for the Mothers of the Australian BSE. I stand in awe of their determination and drive. I think of Di Welfare and her battle and hope, somehow, she knows that Lily Arthur and others carried on and are making inroads and that her struggle was worth it. Kudos, Ladies.
The pain comes from knowing that we, who are supposed to be the "modern" nation, are lagging behind, woefully, in progress.
Our victories have been small and the job ahead is momentous and in need of fewer factions and more cooperation. Like Sandy, I weep for the American mothers and adoptees. I weep because I see little to encourage me. I weep out of sheer envy that the Aussie Moms have a few reasonable people who listen in their government. I weep because we have become an elitist nation with no true democracy that would allow us to be taken seriously by the powerful.
I have become, as I grow older, increasingly ashamed of our government, our obsession with the bottom line and the Puritanical atmosphere that pervades the halls of our legislatures, courts and campaigns. We are NOT the leaders of the free world. We are dragging and lagging in so much and it is the attitudes that say business is more important than people and that we need to control with religion which has held us back.
I am reminded of an old TV commercial for a cigarette that had a jingle.."You've come a long way, Baby," as if having a 'feminine' smoke was a hallmark of our struggle as women. They played that commercial to death, yet the ERA failed by just a few states. Fear-mongering by the few and the loud brought it down. To me, that is just one of the indications of the sheer size of the struggle facing the Mothers and adoptees who want justice, open records and redress rather than the condescending kind of profit-based, token replies we have seen so far.
Cooperation, mutual support and understanding and respect between the different factions of this struggle in the USA could go a long way towards progress. I echo Sandy and other mothers who have carried seething outrage under our skins for decades. It's time to voice that outrage, to stop cutting off our noses to spite our faces, and stand together. If we don't, I know I will go to my grave, not ashamed of who I am, but ashamed of the nation of my birth.
The mothers in Australia have made this fight as much about them as it is about the adoptees. They have no problem with making their needs as important as those of their children. It's past time for us to do the same. We also have issues, pain and righteous anger over the way we were treated. We are Mothers who were not given the right to raise our own children over some kind of silly, religion-based, social mandate and we are pissed.
And there is no shame in that.
Posted by Robin at 10:28 AM

I put my frustration and rage to work today,and just got home to your post. I cold not agree more. I cannot understand how things are so much more anti woman now than they have ever been in my memory, which points out the contrast so emphatically.

If mothers cannot or will not stand up for themselves, or see themselves as worthy of respect and acknowledgment, we are beytontrond hope...

I needed to raise my son and I was not allowed to do that.
When he turned 21, I found him and we had a mostly good reunion relationship until his sudden death from blood cancer at age 39.

When I worked in the state legislature the pressure was constantly on me to make the emphasis "only about adoptees' access to their birth certificates"..

But, I worked for mothers' rights too...to their children...to their records...to reunion..to identifying information on the other "triad" members..

It is a 14th Amendment issue.."equal protection under the laws" and "due process" all of which we were denied.