That Was Then...Look At Now 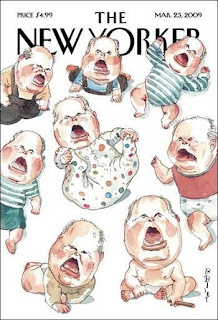 In 1962, ANY young woman who had even just one sex partner outside the bonds of holy deadlock was called a Slut, with impunity. And we had no recourse except to hold our heads up and try to survive. Some went into the closet and never came out again. Round heels, whores, "mattress-backs," tarts, hussies, easy and pushovers...those were just a few of the ways people referred to even the young woman who loved not wisely but too well. We were even held to blame if we were raped.
Once the Slut Bomb was thrown at you, it was hard to shed the title. In a small town where everyone knew everyone, it was nearly impossible. Girls were having sex that were either lucky or infertile. One woman I know who bragged of her virginity on her wedding day admitted to servicing her fiance manually until the big night.
The thing I find so absurd is that, had we had access to safe,
effective birth control in those days, we would have passed the marital finish line with reputation intact. Our fecundity was the curse that landed us in Slut-land. Back then, we just put up with the indignities that the cruel and Puritanical laid on us and tried to get on with living, as hard as that was. I was one that was determined to regain respectability by hook or crook. I don't think, in the eyes of my small community, that I ever did it. Once labeled, always labeled.
Now a young woman, a student, comes before Congress to plead the case for birth control for all and she gets slammed in the worst way with no evidence but that she advocates for the rights of all women to have access. The pompous and misanthropic Rush Limbaugh made crude observations and even cruder suggestions. And American women are up in arms and ready to do battle.
THIS is the kind of progress that has happened since I was a "teen-aged, unwed mother" in the early '60's. I, silly me, thought that the days of judging women by such stringent and unreasonable guidelines was over. But there is that small, LOUD, sex-obsessed group of theocrats, pundits and right-wing extremists who want to drag us all, kicking and screaming, back into the 19th century.
We, the products of our generation, had no real arena in which to protest the outrageous sexism of our day. Women struggled for one and got it and now they are geared up to use it. Women from all over the country and good, open-minded men, have written and called the sponsors of Limbaugh's show, carried on Clear Channel outlets, and he has apologized, weakly, twice. He is losing ad revenue for his sponsors and I see him fading away, just as Glenn Beck is doing. One woman answered his challenge in the New York Times. 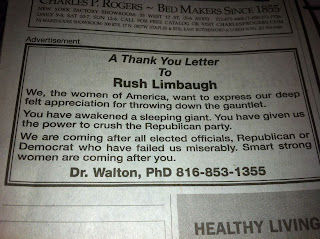 I, for one, can't let this idiocy go unchallenged. The pudgy pundit is just one example of the unfair war against women..an attempt to "keep us in our place" by the powerfully insecure. We have GOP-heavy state legislatures churning out the anti-choice legislation as fast as they can but not doing a damn thing about the economy or jobs. We have a Klown Kollege Kampaign with Mittens McMoney, Ron "Stormfront" Paul, Newt "Philanderer" Gingrinch and the worst of the crazies, Sick Rantorum or "Frothy" (Google him).
What is worse is that there are other women who support this retrogression of our gender by force. They are the ones who blow me away. The pursed lips, bibles in hand and the box of tea bags usually gives them away. These prissy, asexual types would make good adoption agency social workers.....or nuns. I am sick of seeing hands slapped and voices stifled just because they are female. Oh, they allow the likes of Caribou Barbie, Coulter, Bat-Crazy Bachmann and others like them to have a say, but they speak as puppets of the Patriarchy or because they are simply nuts. As this gem from Patricia Heaton illustrates; "I really have great sympathy for Ms. Fluke and so in order to help her out I want to urge everyone to place at least one (unused) condom in an envelope and send to her at:Sandra Fluke C/OGeorgetown University Law Center600NewJersey Ave., NW,Washington,DC20001Maybe if enough of us respond she can make it through at least the next few months." For this atrocity in the LATimes, she offered a Limbaugh-Weak apology.
The GOP would not allow Sandra Fluke to testify in front of their panel yet entertained a full contingent of male clerics as "experts" on women's health. Sex-obsessed and using the fallacious sins of Eve to charge forth, these misogynists are forgetting one thing. Women are not like they were in the bad old days. We have a voice.
This upcoming election is important to the mothers of the BSE in more ways than one. We can erase that scarlet letter, once and for all, for us and our female progeny, by voting these dickless wonders out of office and refusing to remain silent. We have talked about our outrage at how we were treated in the past. How can we stand by and allow it to happen again?
We can speak up, now. They can throw names all they like, but we don't have to pick them up and wear them. They took our self-esteem, our autonomy and our babies and left us with ashes and they got away with it.
But that was then and this is now.
Posted by Robin at 10:47 AM

I am with you! I have a new motto:

Men are so busy trying to learn to be He-men - they don't know how to be men!

LEAVE MY BODY AND MIND ALONE!

Lori...I am Robin's son. Please don't categorize all men together. That is just as sexist...

I think these are the men Lori was talking about.

remember the term "technical virgin?" Your post reminded me of these girls/women who technically remained "virgins" because they did not "allow entry" by the "male member" into their vagina...however....

They did every possible "other" activity known, and they usually had quite a reputation..for skills.

Sometimes they even got pregnant, because of 'transfer" similar to artificial insemination. I know one mother who was sent to a Flo Crit home, still a technical virgin...but pregnant...in 1964.

Some of them were taught the technical virgin behavior, apparently, by their own moms, who believed that this was a form of birth control and a way of satisfying a man...and still remaining a virgin.

rprovicI am sick to death and at heart that this seems to be a growing thing again. I can't help but feel it is spurred on by fear manifested by the previous administration, but it is amping up to heightened levels. When they begin to redefine Rape as only when there are visible injuries, or when a woman who is raped is no longer a "victim" but is now only an "accuser" it seems that the rest is just a logical progression...

The hatred towards women today is frightening, and the crime of rape is becoming harder to prove.

A recent case of violation happened in Washington state. An 18 year old woman was raped. She reported the crime, the police did NOT believe her.
She was accused of "false reporting' and was forced to pay for court costs and "counseling" for herself.

About a year later, police were called to a home in Colorado where another rape was reported. The rapist had raped another woman...and the Washington woman's picture was also found on his cellphone.

Colorado police notified Washington state authorities who admitted that they had let the rapist go...and had blamed the rapist's victim, forcing her to pay for damages.

You should hear what the good conservative Christians are telling young girls, and have been for years! It's the same old double-standard garbage aimed at making girls feel guilty and ashamed of their sexuality, really classic stuff putting all the responsibility and blame on girls. The girls are supposed to dress modestly, lest they tempt some male, and to watch what they say and where they go, and to guard their virginity, "the most precious gift" they can bestow on some lucky guy. That's their abstinence education!
We have to stand up to these antique-minded bullies and it is so good to see that starting at last.

I got away with my "secret" baby because I was far away from home and then blew that town, like a gunman who knew better than to stay. It was as if I popped up in Rochester to have my baby.

Sam, you are Robin's son? The Robin I know but don't know? Hi. Your mom is great.

Thanks, Lorraine...yes, Sam is my youngest.