And What A Day It Is 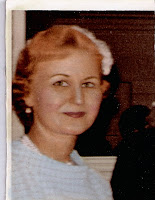 Phone calls (one of them collect), e-cards (two especially lovely ones from my daughters), some hastily ordered flowers and a quiet morning have worked together to make this a rather good Mother's Day. Hubby and I are both ailing and we are just sitting and letting things flow by. He is on a special diet of next to nothing for the next two days, so cooking chores are easy enough...especially since I am having teeth removed and am living on smoothies and soup.

I wonder if it is my age or just the fact that I'm sort of sentimental today, but, children aside, I found most of my thoughts turning to my own mother (pictured). She was only 46 when she died. This picture was made 18 months before that horrible night. I was 23, still reeling over the loss of my two oldest children and raising my youngest daughter who was 3 at the time. Mama didn't live to see her two oldest grandchildren come back into the family, but I know my Mama. She would have been thrilled. There would have been tears and hugs and lemon meringue pie.

Like the greatest percentage of mothers from the BSE, she thought she was doing what was best for me when she packed me away to the nearest Flo Crit and insisted on surrender for adoption. Her dreams for me never found fruition because all I wanted was that balm that the social workers had promised me...that I would have other children and the pain would go away. I had other children, and they have been total joys to me, but the pain didn't go away. I didn't finish school until a few years later and the college education she so wanted me to have was never realized except for courses taken, here and there, and some audited when money was really scarce.

I often wonder if it would have been different for me if I have been allowed to keep my first baby. For some reason, I doubt that the date-rape that conceived my son would have ever happened and that I wouldn't have married the first guy that would have me, what with me being "soiled goods" and all.

But we can't go back and change anything and we have to play the hand we were dealt. I have learned a lot from so many other mothers, but how I wish my own Mother was here to share this day with me. She would have been 86 had she lived. This makes me see, even more clearly, the loss suffered by the infant adoptee. No matter how old or how young you are, you're never ready to lose your mother.

So, instead of gifts and cards and calls, my sister in SC will take the bouquet of white roses and baby's breath that we all buy, together, and place them on a simple marker that reads; Muriel Smith Kinney, March 21, 1922 - December 21, 1968. Mama, I know you would have told me that you were sorry I was so hurt and you know I would have forgiven you...in fact, you are forgiven. And I can keep all the good memories of my beautiful, talented, redheaded Mama in my heart for the rest of my life. I only had you for 23 years...a relatively short time. But I cherish every one of those years.

I miss you, Mama.

Love,
Your Gray-Haired Baby
Posted by Robin at 4:09 PM

Your post brought
tears to my eyes..and your mother what a beautiful woman!

Our mothers thought they were doing right for us. I do wish I could forgive my own mother who called me yesterday. I have not talked to her for a while because I am angry. I was in shock when I heard her old voice she is now near 80 years old.

I wish I could get my own mother to acknowledge my loss. OUR loss, my son.

I am sorry that your mother isn't here to share this day with you. What a beautiful tribute to her.

thank you for posting it for all of us to read. I also enjoyed seeing your adult children all together.

Thank you for the wisdom Robin.
Hugs,
Barb

Robin - thank you once again. No further comment required (on my part).
Margaret_Diane@hotmail.com

Your mother sounds like a beautiful soul and I can certainly understand why you miss her so much. She must be so very proud of you.

What I wouldn't have given to have had a mother like yours.