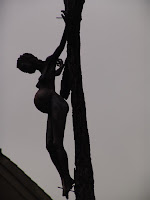 What so many mothers from our era and mothers from the present and not too distant era in the past and the Babies of the BSE, fail to understand or recognize..Once you came/come under the radar of any social worker, agency or maternity home.. there was no choice, there was no option. The Adoption Wheels were set in motion and they turned faster and faster til the signature for surrender was taken. I knew some young unmarried moms way back when, who did keep their babies born out of wedlock..the difference was...no agency, no maternity home and those girls I knew were mostly Hispanic. There were also many black unwed mothers giving birth in that time to...their babies weren't taken either. The University of Chicago back in that time was doing research on the BC pill, and were freely giving out the pill to young black unmarried women on the Southside of Chicago. Yet the 'middle-class white' girl would have had to seek out the pill back then, much like a drug-user today seeks out drugs in the street or find some smarmy quack doc on what use to be 'skid row' in Chicago. There was most certainly a real life social engineering project, that involved many highly educated people from different areas of studies and degrees, that were purposefully hell bent on separating white unmarried mothers from their mostly 'healthy white infants'. When you tell people this, they are most disbelieving. Surely not in this great nation of ours could such a thing happen! Especially to WHITE PEOPLE!!! Yes, it can and it did!! And I believe this is what scares the Bejesus out of ordinary people. That bad things do happen to good people in America..Always have and still does. So rather than believe that bad things happen to good white people, ordinary white folks stuff cotton in their ears and put blinders on their eyes. I have often thought, especially when speaking to my own lost/found now adult child. How could it be in America.. in a very short period of time..that at the very least a couple of MILLION young white unmarried mothers would all think the same way, same thoughts, same methods at the very same time...that would result in the supposedly 'voluntary' surrender of the newborn by the young mother. Mostly involving Catholic Charity adoption agencies, Lutheran adoption agencies, large city child welfare depts. and of course well known maternity homes. That is not mere coincidence...that is a most well developed, orchestrated PLAN, by those who were in power and authority over those who had the least power and authority over their own lives and the lives of their babies, young unmarried mothers...Unmanned! This is no 'blame game' folks...these are the facts and those 'facts' are written down on paper. One only has to make an effort to 'read' historical studies on 'unwed', 'unmarried' pregnant mothers to avail themselves of these facts, The Truth in how millions of young unmarried mothers and their newborns were separated. It is a most ugly truth, it is a scary truth..but truth it is. If it happened once, like anything else in life, it can happen again. But! ordinary people don't want to feel afraid..they want to feel safe and secure in their homes and their families, and comforted in the fallacy that they are the only Masters of their individual destinies and that of their natural families. No you are not!!! The State, always has and still does...trump the 'control' of the parents/family..as the State (Father)sees fit. You don't have to be a sexual abuser, a neglectful parent, drug addict, a general ne'er do well....all you have to be is young, naive and short on cash, and O! yes...pregnant. How much justice you receive in this country, is based on how much Green, one has in one's pockets! No Green you say?... well then..you are unfit and unworthy and you can hit the road Jack! but without your kid! You have been warned!

You have made a good point, Shadow. The industry didn't want "children of color" as chronicled in Ricki Solinger's "Wake Up Little Susie." They wanted that "healthy white infant" for those poor, able to afford them, infertiles. Funny that a group against whom there was outright discrimination was made up, largely, of middle-class, white girls and women. I know two African-American BSE moms and they are both from the Bible Belt as I was so that says something for regional situations, as well.

It's like that Alex Haley quote: "History is written by the winners". With the internet and blogging and groups we have the ability to try and make sure that doesn't happen for this nasty bit of women's history.

There's so much to learn and so many stories yet untold. How can anyone not see how important this era is?

I see the BSE as a distinctly feminist issue. I just wish more women who considered themselves historians or feminists would too. Then again I don't have a lot in common with many women today who consider themselves feminists. Too many of them are busy adopting :(

"Then again I don't have a lot in common with many women today who consider themselves feminists. Too many of them are busy adopting :("

From your keybpard to God/dess' ears, ULB! I am so sick of watching women predate on their sisters like lionesses culling the weakest out of the herd. At least, that is natural, unlike adoption. This IS a women's issue and we mothers of adoption loss and our children represent the women that the feminist movement has ignored and failed....miserably!