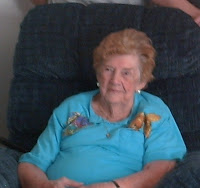 My Mother-in-law, bless her very elderly heart, at 93 has no patience with anyone's illnesses but her own. She can't understand that it takes a while to get over some things and other things you don't get over at all, such as my husband's (her favorite child) Crohn's Disease. She just can't understand why, with all this modern science, they can't give him some pills and make it go away.

It's the same way with tragedies. My stepson, my husband's only child, took his own life in 1996. To this day, my husband cannot go into a Winn-Dixie which is where his son worked part-time until his death and Mom loves to shop in Winn-Dixie. She cannot understand why he "isn't over all that," 12 years later. Of course, she has never lost a child to death. She lost her husband and then her gentleman friend and expected outpourings of sympathy from others but cannot relate that grief to the grief that others endure. I am told that she was never very sympathetic or nurturing when one of her eight children was sick, that their Dad was the one who petted them. Pain and illness in her loved ones scares the tar out of her.

We Mothers who have had children taken for adoption will often get that same message as in, "It's time for you to get over that and move on." Most of the people who say this have never lost a child to death or to adoption. OR, they are the ones who adopted our children. It's a hard thing to try to convey to them that you NEVER just "get over it" and easily "go on with our lives."

My husband and I went to Survivors of Suicide meetings after the death of my stepson and that was where I first heard anyone acknowledge that you don't just "get over" these things. Instead, they taught me that you learn to live with it, to incorporate the experience of loss into your life and re-learn how to find happiness in your changed world. I think that is what a large number of us older moms have done.

We have been smacked in the face with the reality of what adoption separation did to us and to our children and we have pulled ourselves back up to our feet and faced it and made our own conclusions...we can't change it now....we can learn from it....our anger is just....so we do what we can to try to change things and meanwhile we allow ourselves to have the life we so richly deserve after years of grief. We have earned our moments of love and laughter that rare feeling of being glad to be alive.

My Mother-in-law reminds me of a lot of adopters in that they don't want to acknowledge the unpleasant fact that people get hurt when they get what they want. Facilitators don't care. Maybe adopters, for the most part, don't care as long as they get the goods, but I think that some of them suffer from twinges of conscience, here and there.

But, as Mom is finding as her children reach their 50's, 60's and 70's and have real health concerns, not wanting to face it isn't going to make it go away. She is scared and confused and will probably go with the grim reaper, screaming, scratching and clawing all the way. But she is seeing that some of her loved ones do have serious issues, health or otherwise, for she has now lost two grandsons to suicide. When asked what she wanted for Mother's Day, she said she only wanted to still be alive. She will face it when she can and not before, I guess.
For those that either don't want to face our particular form of grief and anger or who don't care, it isn't going to just go away. We have learned to live with it, but we sure are not "over it." Keep an eye on Karma. Payback is a bitch.
Posted by Robin at 2:39 PM