Parents and Other Monsters 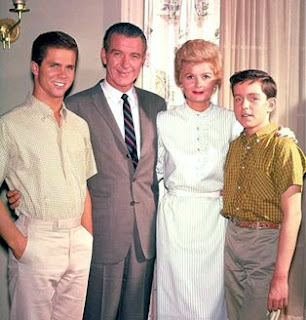 Gee, weren't we just NIFTY?? It seems that, whether our personal families during the EMS were the ideal, neat and polished, nuclear picture of Normal Rockwell domesticity or not, we still tried to see ourselves that way.

Thinking about the issue of our parents and their role in our surrender traumas, I had to point out how the media, network and film censors, and the government presented the image of what we (according to them) SHOULD have been. Lucy and Rickie Arnaz produced Little Ricky while sleeping in separate beds. Mrs. Cleaver kept a spotless house while flawlessly attired in pumps and pearls and a darling, little shirtwaist. Even the movie "bedroom farces" of the early 1960's showed Doris Day and Jim Garner sleeping in the omnipresent twin beds. (And he portrayed an obstetrician in that movie!)

This picture of the ideal family, domesticity and squeaky-clean values was beginning to mix with the sexual and social revolution of the 60's and it seems that all Hell broke loose in real families across our land. I know that I was confused about it all and was not sure why my family was not quite like the model that was presented as the quintessential American family.

George Orwell's "1989" was THE book that spoke of the horror of government control over individual lives. While we read and shivered at the specter of Big Brother and smugly assumed our individual freedoms were in effect, society was already controlling our lives right down to the most personal aspects. Neighbors were watchdogs (what would they think???) of our perceived moral fiber and politicians plotted ultimate solutions.

This was the heyday of the social worker, the nun, the attorney, the OB/GYN and the adopters. These people worked, in collusion with agencies, maternity homes and our own parents to warehouse us, coerce us and break our spirits for daring to go against the social norm. The unmarried mother was the unsightly dust to be swept away and out of sight before the ladies dropped by for tea. I know of one mother who was kept inside until time for her to go to the maternity home, and was led out, in the dead of night, to her brother's car to be taken away while no one was watching.

I know how hurt I was that my mother feared my influence on my two younger sisters. It was as if we had some kind of communicable disease. Watch out for that pregnancy germ! We were supposed to be stronger than the forces of Nature and in control at a time in our lives when our formative libidos were in Perfect Storm Mode. I think the worst part of my experience, back then, was learning that my shame would be shared by my entire family, unfair as that seems, if my terrible secret were to be made known. It became my responsibility, young, scared and hormonal though I was, to protect the entire clan from social disgrace. God/dess help me, I loved my mother, my sisters, my entire family and I didn't want to hurt them.

My motherhood and my two oldest children were sacrificed at the altar of the almighty SOCIETY. It is recognizing this and knowing my mother truly loved me that has enabled me to forgive her for her fear and her part in the surrender of my children. We trusted these invisible forces that decreed what was acceptable and what was not. We were caught up in the post-war naivete' and the strict, asexual mores of the Bible Belt South. It took me years to realize that any group, society or entity that had that many rules governing a simple, natural function of the body, must be obsessed with it. Sex must have been on their minds 24/7.

Some parents were less loving and more appalled than others. They can't all be lumped together as the lead monsters in the horror movie that was the EMS. But I would like to think that the parents of today are less conditional in their love for their children and stronger in supporting them. We all trip and fall at sometime in our lives. In the final analysis, shouldn't family be there to pick us up, tend our wounds and help us deal with the outcome?

My mother truly and sincerely thought she was doing just that. She thought she was protecting my future. She was mistaken. I can't hate her or put all the blame on her shoulders. I cannot withhold forgiveness for her mistake. But I can and will continue to hold the real monsters culpable and call on them to answer for what was done.

And I always thought Wally and the Beaver were Nerds!
Posted by Robin at 7:03 AM

"But I would like to think that the parents of today are less conditional in their love for their children and stronger in supporting them."

I wouldn't bet on it.

"But I would like to think that the parents of today are less conditional in their love for their children and stronger in supporting them."

I wouldn't bet on it.

I am not as far along in this as you, apparently, because I DO blame my mother and my father, and I DO hate them for doing this to my son and I. I love them but I hate them. For 40 years I gave them a pass, thinking that they were just doing what they were supposed to, what society dictated, that they really thought they were doing what was best for me. Bullshit. I don't believe that any longer. Not typical for a 60 year old woman, I wouldn't imagine!

Snady, no two situations are alike. I went through what you are going through years ago. It was my sister telling me about my mother visiting the hospital and me remembering how they came to visit, brought me home for Christmas and called and wrote all the time as well as my mother's last words to me that led me to where I am. No one is required to forgive anyone for anything. You do what gives you peace for your own sake. I have a feeling you need to go through this.

And maybe, I do see parents being more tolerant of unmarried pregnancies on the whole. I know women who have actually given their daughters baby showers and that would have happened when pigs fly back in the EMS. I am sure there are those who are less than supportive and caring. But the social climate has changed enough to allow parents to focus more on the needs of their children and less on what the neighbors might think. JMO

As a "bastard" (said with pride!) born in the early 50's and raised in a very confusing and strange situation of shame and secrecy, reading your perspective on that time is both interesting and emotional for me. I was not placed for adoption but raised within my paternal family. The families I was born into and the one that raised me (a half-brother and his wife) were highly respected and well-connected. The doctor's name on my birth certificate (I suspect it was amended/falsified early in the game) is C. Lee Buxton. He was the physician for Planned Parenthood in Connecticut involved in Griswold v. Connecticut, a famous case about the right to dispense/use birth control, that went all the way to the Supreme Court; he is mentioned in the Girls Who Went Away. When I googled his name, only expecting to maybe find what year the doctor on my B/C graduated medical school, I was shocked to find out his role in this era! Eventually I found close connections between his family and my natural mother's family. Now that I have found your blog I will be reading more. Just wanted to say hello and so glad you are talking about this and supporting each other.