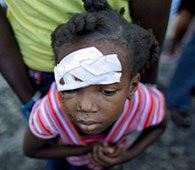 My next-door neighbor left for Miami, yesterday. Jean is from Haiti and has learned that his brother and sister-in-law were killed in the earthquake. He has inforrmation from a friend that his two nephews, Alaine and David, survived and he wants to make sure they don't wind up in the adoption pot or foster care. The boys have no living relatives in Haiti, but do have Jean and his wife, here in FL and another uncle and aunt in Paris.

It is only normal that relatives should be the first to be consulted when children are left without their parents due to a tragedy. But the American way is to favor genetic strangers who have passed some agency's home studies over members of the surviving family. What is wrong with this picture? For a culture that exhalts the idea of the nuclear family, there seems to be little regard for family ties in the US.

Jean's nephews, if he is able to locate and intercept them, are among the lucky ones who will, at least, be with their relatives and will be exposed to their own culture. Many more are being looked at with greedy eyes, by those who  are ready to airlift as many as will fit on a jet liner and place them in the adoption system. They may have living relatives still in Haiti, or in the US or elsewhere in the world, but there will probably be little to no effort to find them and give them the opportunity to take in their young kinfolk. The little ones will be picked out like ripe berries by salivating PAPs.

I learned something new, this week, by reading the daily Bastardette. In a repeat of the 1960's "operation Pedro Pan," there are plans afoot to airlift Haitian children to south Florida. Pat Robertson had his usual inane and insane remarks* to make and it seemed to prompt this response in the Miami Herald. Bastardette did a lot of research and came up with some information about this operation that would make any thinking person cringe.

The original "Pedro Pan" operation airlifted children out of Cuba. Mel Martinez, retired Florida politician is a Pedro Pan adoptee. Now there are some questions about whether or not "Pierre Pan" will procede as a full-blown operation or not, but it's a situation worth watching. Bastardette is keeping apace of this situation as it unfolds and it is fascinating reading.

If I had a message for those PAP's who see the tragedy in Haiti as a source of adoptable orphans, it would be that anyone with family living is NOT an orphan. Jean is making the trek, downstate, and contacting immigration and goverment agencies to make sure they know this. CUSTODY BY KIN SHOULD ALWAYS BE THE FIRST RESORT. Did I say that loud enough?

I really wish that some of these PAPs could have honest conversations with adult international adoptees who were taken from their homes and cultures and adopted by arrogant Americans who are so sure our culture is superior to any other.

I don't think they would like what they hear.


(*According to Robertson, the earthquake is the result of Haiti's "pact with Satan." tee hee, chortle and LOL)
Posted by Robin at 1:43 PM

Pat Robertson is Evil Incarnate...one can only hope that Karma is a true fire-breathing, outraged Bitch when it comes to this ?????? man ?????

The baby hungry vultures are circling and are ready to prey on Haiti's innocent children!!!!

I a so repulsed by these circling carrion birds! I wonder if they realize how the world views them?

Pat Robertson and Rush Limbaugh....I have to go along with Gypsy in my fondest hope that Karma kicks their asses! And, I hope that they enjoy their slow roast in eternity!

To put it in more striking terms, think of it this way. After Hurrican Katrina, were PAP's gung ho to fast adoption there. Simply put no. During a disaster, children are always the most vulnerable, no one would be placed for adoption without first ascertaining who was truly an orphan. The people of New Orleans wanted recontruction. It shouldnt be any different in Haiti. And I reiterate, Pat Roberstons is a dick! His co-host has adopted something like a zillion times. they are HUGE part of the problem.