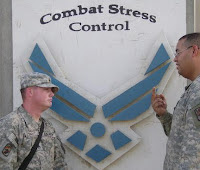 Ah, yes. Today is the fourth of July, three cheers for the red, white and blue and all that. I am convinced, though, that America has long ceased to be the home of the "free." The picture taken, above, is an army propaganda piece that shows my grandson, KC, being "counseled" for combat stress "control." Yeah, right. Bring him and his comrades home from this farce of a war and that should help that PTSD a lot!
It looks to me like our soldiers in the middle east are getting the same kind of "quality" counseling that we (mothers of adoption loss) got. We were told to, "go on with our lives," that we would "forget" and that having more children would "cure" our grief. Mothers of today are told the same thing, only in the honeyed words of pro-adoption counselors provided by the agencies that marketed our newborns and social wreckers that play God with our family connections. Any trauma can cause PTSD and there are so many mothers who are still, decades after the fact of surrender, struggling with this condition.
The freedom to have a family is fast becoming a privilege granted only to the "more deserving" and the government that WE have elected is doing all this in OUR name. Like this misbegotten attempt to control an industry through combat, there is that factor that wants to emulate Adolph Hitler and create an "ideal society" through eugenics.
In the era of the Senior Mothers, like me, it was overt, punitive, fueled by shaming and the puritanical, sexist mores of an unjust, patriarchal society. Then, when women became able to make more of their own choices, it became Madison Avenue-slick, covert and the artful work of spin doctors changing the language. But, under all that facetious, saccharine advertising, there lurks the same message..."Thou art unworthy."
All of this crap will continue until we, as a nation, take back our government from the lobbyists and power-brokers. What we think is a "choice" is nothing more than a carefully orchestrated charade and so many of us buy into that bad deal. I see a nation of sheep with shepherds that love fresh mutton.
I know, we complain but what do we do about it? Hey, I'd love to run for president. You want to write me in? I'd investigate the BSE and demand the return of many children to their families of origins. I'd open records for both adopted people AND mothers and I would bring our military home from that bleak, desolate pit of horror over there. I would make some REAL changes in our economy and educational system.
Yep, if I were qualified, I would run. But the truth is that, if I tried, I would still be picking myself up out of the mud when the "super delegates" and the supreme courts got through making our choices for us.
There are those who say that America just isn't what it used to be and they are so right. But, more than that, America just never quite got to be what it was meant to be and that is the real tragedy. Today, I grill out, watch fireworks, fly the flag and dream of a nation that has fallen short of its promise but still has what it takes to make it.....
.......if people will just stop, listen and learn. God/dess, HELP America.
Posted by Robin at 9:25 AM

Robin said: "The freedom to have a family is fast becoming a privilege granted only to the "more deserving"....

Boy, that could not be more true. I can't count the number of times I've seen articles where social workers are taking children away for no reason other than lack of money. Even scarier are the comments attached to these articles...hooray, take the baby from the poor mother who is down on her luck, she doesn't deserve a family!

Everyone thinks if you don't have a McMansion, Hummer, and 15 credit cards (all maxed-out, of course), then you are a loser whose children should be taken away.

Is it better to plan for children when our lives are better organized? Of course, but mother nature has other ideas, she finds a way to make babies despite our best attempts to thwart her. This means we need to help women in tough circumstances who are trying to raise their children, not turn them into grist for the adoption mill.

Maybe, if I had waited until my life were "better organized," I'd be having my children right now. The trouble with that is that I am almost 63 years old. If I had waited until we had enough money or the "right" kind of car/home/career/etc., then none of my children would ever have been born. Nature does, indeed, fight the will of the eugenicist.

And all who read, please send safe and comforting thoughts to our men and women in the middle east, today.

I've been reading and admiring your writing for some time now. But to show the link between adoption propaganda and war propaganda--well, that's just true genius. All this propaganda is so very well-crafted, isn't it? Thanks to you and other brave mothers who have lost at least one child to adoption, many people are beginning to see through such malarkey.

Hi Robin, I'm not sure this comment really speaks to your post, however, I have been pondering previous posts where you have mentioned that you would like to see an apology for the BSE?
Just last month in Canada, our federal government issued a very public apology to the First Nations people over the government sanctioned atrocity of removing children from their families and placing them in residential schools that were frought with horrendous abuses, all in the name of a "better life" as the thinking was if we make these kids "white" we'll improve their lives. Hey, why be Native when you can be white, which is the best race there is? Um, hell no.
Anyway, many parents who went looking for their stolen children were told they were dead.
It is a dark smear on Canada's history, but at the very least our government has recognized the travesty of the time and apologized even though the current government had nothing to do with what happened. The point of course is that they were apologizing on behalf of Canada.
I guess my point is that they recognized the ills and made a sincere apology, it never should have happened. When I saw this, I immediatley thought about BSE mothers. Would the government do the same for all the mothers who were treated so cruelly?
I don't know, but I did think that it sent a precedent.
What do you think?

That prescedent was already set in New South Wales, New Zealand and Australia, Kazi, and it brought the rate of infant adoption down to single-digit numbers, per year. The apology was not just to the aboriginal people but also to all the BSE mothers, white or aboriginal, of that part of the world. Great strides were made in that investigation in NSW and the writings by Dr. Rickarby on the effects on both mother and adoptee are very spot-on.

Unfortunately, it is going to take a lot more effort in the US. Here, it is, literally, a big business...a flesh trade and the US ultra-capitalistic bureauocracy supports that trade. Our heel are dug in and we hope to see the same reduction in adoptions, once the real story gets out, that has been seen in OZ.

We also have Native American people who had thousands of their children taken for adoption and they only make up a small percentage of the holocaust of baby-taking that took place in the BSE. We need justice for ALL the mothers who lost children in this heinous way.

As a mother who had her son taken mid 60's while her son's father was getting ready for the Vietnam war, I too find this appalling telling soldiers to get over it..bull crap.

I NEVER will get over it..losing my baby. It is with me everyday even in my reunion with my grown adult son.

I lost two people in my life..my son in 66 and his father my love in 67. My son's father died almost a year to the day my son was taken from me..