Door Mats of the Word, Rebel!! 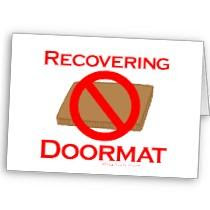 I have really enjoyed seeing the New Year's resolutions of my loved ones. I am impressed by two. My son has resolved to develop more of an empathetic personality. I am so proud that he would make this kind of decision about his own demeanor.

And another loved one, another thinking member of our clan, has resolved to quit being a door mat, to learn how to say no and to not be drawn into things she cannot change. Good for you, Honey!!!

I made the same decision, although not for a New Year's resolution. I don't usually make any resolution on the first of January except to continue to hope, love and do my best to be a good person. This came as I entered my 40's and realized that I needed to be my own advocate and support because I was leaning too much on others.

I can so identify with the scary leap from door-mat-hood to full, autonomous human being. I was a wuss who couldn't say no and who tried to fix things for others. I went along with what others said, even when I disagreed, deep inside myself, with what was being said. Giving myself the right to say "No," to speak up and have my own opinions was the first step in recovering the woman whose personality was ravaged when her two, oldest children were taken from her.

I had to learn that it was more important to respect and like myself that to be liked by everyone. Of course, you have to take the flak from those who liked the devil they knew rather than this new, more assertive and self-confident person. I graduated from meek and easily upset to "shrill, bitter, angry, bitchy" and many other adjectives used by the folks who disagreed and who were used to me bending to their wills. It's part of the bargain. I learned to live with the disappointment.

But I noticed other side effects of this change in my perspective and attitude. I stopped whining and started opining. I stopped the pity parties and put on my smarty pants. I developed the ability to laugh with and at myself. In fact, I laughed a lot more than I had before. I learned to ride the waves of life without going berserk. It was like a curtain, slowly lifting to show a sunlit vista and it is worth facing the fear and entering the struggle. To say I am perfectly there would be a lie. But the work is progressing nicely.

And I learned that I did not deserve what was done to me as a single, teen mother.

Strong women who stand up for themselves, no matter how courteously they do so, will always be called "bitches" by her detractors. Well, a bitch is a female dog and there are some of those noble critters that I respect a lot more than some people I know. So call me a bitch if you have to. I'll take it as a compliment.

I just wish I had been enough of a bitch and less of a door mat in '62 and '63. Of course, back then, NICE girls were career door mats. It was pounded into us at home, in school, at church and in every media presentation of what was the ideal woman.

I have a loved one who went to far in the other direction and was a bit of a belligerent bully when we were growing up. I didn't want to be like that. I would rather be respected than incur fear. I feared all authority figures in my life and let one or two get away with things that no one would get by with, today. It is tragic that I was not where I am today, back then. Things would have been very different.

But spilled milk calls for a clean-up. I think an application of justice and redress would do the job. Meanwhile, I am rooting for my relative and her courageous resolution. May her ovaries grow big and strong!
Posted by Robin at 12:05 PM

I have always disliked the word bitch because it is used to control women. Anytime a female doesn't do what others want her to do, it's "What a bitch". It also bugs the hell out of me that there is no equivalent word for men.

I tend to take a cue from Bastard Nation, here, and make the term "Bitch" a badge of honor. And as for men, I have always favored Asshat, Asshole or Pr***. The word "bitch" is not really a dirty word. It is society that has made it that way.

Great post Robin - it really reminded me of some things that my sister and I have been going through in the past few years. Sharon

Robin - from one hard woman to another - YAY! LOL - you would not believe how many people think of me as a "bitch" and how many times men have told me that I am a "hard woman" - which is actually kind of amusing....

A man once defined that to me as a woman that wasn't feminine and soft - emotionally. Which actually, I took as a compliment... since that ability to stand alone was one of the things my husband loved about me.

I'm on the fence re: "bitch." I am a self-identified bitch at times, but I find the term particauly distasteful when it is used to describe young girls. I have heard adult men and women refer to young girls (and even their own daughters) as "bitches" which really hits a nerve with me.

That's appalling, maybe. When it is some pencil-dicked man calling a woman who is assertive and accomplished a bitch, it's one thing. Or even calling oneself that is OK. But girls? That's sick.

Years ago, when I had just met my now husband at work, there was another coworker, a man, who was constantly calling me a bitch. I had never been called that before, that I knew of, and was a bit taken aback by it flowing so trippingly off his tongue in my direction.

Then I attended a seminar on assertion. One of the speakers said that, if a man calls a woman a bitch, it is a sign that she somehow threatens him. Something she is doing or saying in some way is perceived by him as intimidating and since he doesn't know how to fight that, he calls her a bitch. She said that the appropriate response, therefore is a quiet, "Thank you!" Since that time that has been my response every time a man has called me that and oddly, they seldom call me that twice, but they sure do act puzzled when they hear it!

And when I call Sandy a bitch, she laughs. heh heh