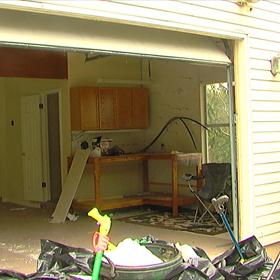 Landlord Shocked To Find Children Living In Garage
CANYON LAKE, Texas -- A Canyon Lake homeowner told News 4 WOAI he was shocked to find out  six foster children were sleeping in the garage of a home he was renting out to a couple.

Charlie White showed News 4 WOAI's Jozannah Quintanilla the 2-car garage where he says the couple had the grade school-age foster children sleeping. White said they had no air conditioning or heat in the garage, and the children were sleeping on homemade bunk beds in the crowded room. White believes three other foster children were living inside the two bedroom home.


"They had a wall built across the garage under this beam, and a wall across here," said White.


A neighbor who lives next door sent White a letter, letting him know how concerned the neighborhood was for the children.
"I showed up the next day to ask them what was going on and where they were keeping all these kids," White told us. "They told me my house was a therapeutic foster home."


White walked into the garage and told the foster parents it was no place for the young girls to be sleeping. That's when he also found out there was a 30-year-old mentally challenged man living in the garage with the girls.


"I told them they needed to get the kids in the house and tear these walls down," White said.


When asked why he told them that, he explained. "Because a fire could break out in here, and these kids would have no way of getting out.


Soon after White and his neighbors reached out for answers.


"All of the neighbors were concerned. Several have called CPS," explained White. "They couldn't understand how nine children could be living in the home."


"Thirteen people using the toilet," White added. "The ceiling is caving in. It's got mold in it."


With more than a dozen people living in the home, White said every room in the house was damaged. He immediately went to court.


"They refused to take the walls down and to move the kids in," White told us. "That's when I told them they have to go."


A judge evicted the family last month. Since then, White has contacted the agency responsible for the children.


"Because they allowed this many people in the home, they've done this much damage," added White. "They're not concerned and seem to be covering it up."


White says he and the other neighbors are concerned about where the children are living now, but he is also thousands of dollars in debt from the damage done to his home.
News 4 WOAI found the family living in a home a few miles just down the road. We knocked on the door but got no answer. We then contacted Child Protective Services.

*******
Thanks to Sandy Young, who lives in Texas, for putting this story out for the rest of us to read. I felt it was an appropriate follow-up to my previous post. It seems that, for many adults, the welfare of children is forfeit when it comes to the bottom line. I would love to hear from the CPS in Canyon Lake and hear what they have to say about this execrable situation.

Why do we decry orphanages and yet allow this kind of cruelty in the name of a "family home?" A clean, warm, well-run children's home would, in my mind, be head and shoulders above foster care as it is, now, in our nation. While there are many who provide decent and caring foster care, the system is too top-heavy and overloaded and corrupt to avoid situations like this and many others.

Unfortunately, our profit-based culture puts the funds into the pockets of the already wealthy, big business, "defense" contracts and perks for elected officials while the most vulnerable among us go begging.

Not only did we Natural Mothers get sucked into the system because we were not legally the chattel of a husband, but also because too many of us were financially dependent on our parents or unable to make enough money, due to the inequity in pay scales between men and women, to provide for a child. The bottom line, here, is tragedy.

Note that a wealthy woman, such as a famous actress, etc., can raise a child as a single woman without an eyebrow anywhere being raised. Many women who have reached an age when the biological clock is ticking loudly, will quietly opt for single motherhood because they can afford it. They can usually fly under the radar of the agencies and the coercers because they are financially comfortable.

This concept is attributed to many different sources, but the fact remains that the might of a nation is judged by how it treats the weakest of its citizens. The US scores low on this one.

Now, I don't hate the rich. I look at Warren Buffett and Bill Gates who are giving away huge portions of their personal fortunes. Then I look at Pat Robertson who is very wealthy in his own right and he is not putting his money where his loud mouth is. He professes to be both a Christian and a patriot. Neither Gates nor Buffett make any comments about their religion or lack of it. I wonder if Robertson would be willing to provide a safe and comfortable home for needy children without requiring indoctrination into his brand of religion? Naw, I didn't think so.

But the drive to have money = power = control has reached a new low when a CPS agency allows little girls to live in an unheated, non-air-conditioned garage with mold, dirt and a 30-year-old man.

It's frustrating, but my question is, it is fixable?

It is very convenient and coincidental that WOAI pulled this story from their website at the same time that it was announced that the Texas state legislature would be addressing the expansion of privatized foster care in the state. This particular case was a privatized foster arrangement through the Baptist Children's Home. Curious, isn't it? Calls to the station have resulted in less than full disclosure other than impugning the veracity of a source. BTW...the landlord and the neighbors DID call CPS and CPS investigated and said they couldn't see any problem. Now isn't that strange? Of course, would it really be in the best interests of the CPS to have verified the complaints? And why is the Baptist Children's Home also investigating if there is no reason to doubt the findings of the CPS? Just asking...........

Deplorable that these children have to live like this in this
anywhere. Were those fosterers getting paid? If so they should be jailed.
If only these kids could have been kept with their families
and helped. But of course, we have to tear families apart
in hopes of getting these kids adopted and the state making it's money for getting a child adopted. These kids are throw away kids and future young mothers who will more than likely be pushed to give up future babies if not
forced to by our baby mongering government.
Don't get me started about single moms who are celebs who use the baby for publicity. Sandra Bullock the most recent who kept adoption a secret. She is just another one ofany women who feel entitled to someone elses baby. Greedy and needy who think they can feel whole by using a baby and adopting. Most of these babies if not all will
be raised by a nanny. That is NOT better for the child just another adopter feeling like they need an accessory to make them feel better about themselves. Look at Marie Osmond who is going around getting herself noticed as a grieving mom to her adopted accessory who killed himself. Self centered she should have helped him feel whole by searching, but of course she would have to admit she wasn't mom and her big ego would have lead her on another publicity jag. About how wonderful she was and is
Repulsive is the words that comes to my mind.
Gale

Looks like a working garage: time to out the TX district court judge who allows it.... He should be prosecuted for child abuse and the TX CPS workers jailed with him.

You shall not abuse foster children by treating them like inanimated objects (cars).

I hate to say it - but almost all foster children are income....that's about it. If you ask for the right kind of kid - therapeutic needs - you get more money than you need to care for them. If you take a bunch of them, you can afford a house and the money to revamp into a kiddie warehouse.

The thing is, truthfully, there is no one that wants to deal with these kids and social services ties your hands and makes it impossible to deal with them on a level that is not sweet and stupid....frustrations abound, children get dumped off on someone else and young adults hit the streets so damaged that they can't function as adults.

It is a pathetic testimony to our country.

I am familiar with this family. Several months back, the foster "dad" was picking 2 of his girls up from soccer practice. My 10 year old daughter is on the team. I had just left with my 5 year old son and my wife was still there with many other parents and children. He started laying on the horn and screaming at the girls from the parking lot. My wife started walking over to him to tell him to calm down when he keyed on her and starting yelling obcenities at her. When she got home she was shaken, as was my daughter (and all the other girls that were there, I'm sure...) The next day she filled out both a police report and an official complaint to the local sheriffs office.

I'm not sure how CPS treats things like this but it seemed to us there would have been some sort of a follow up... a phone call from a case worker or a home visit to get more info... but nothing.

I see these girls when I'm up at my daughters school and they are very sweet... it's a sad situation that they are in.